Authors M. Brooke McCullough and J.E. Boydston’s new book “Canarytown: City of Grief” is a fast-paced and suspenseful race against the murderous predations of a monster

Recent release “Canarytown: City of Grief” from Page Publishing authors M. Brooke McCullough and J.E. Boydston is a riveting detective drama following the hunt for a vicious serial killer stalking the streets of Chicago. Detective Kyle McNally leads the investigation tracking the deranged psychopath while navigating the intersection of his personal and professional life. 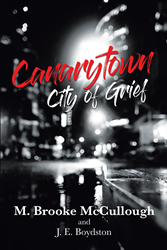 M. Brooke McCullough, a former Secret Service and federal court system employee, has been an avid reader and crime fiction fan since high school. She and J.E. Boydston have completed their new book “Canarytown: City of Grief”: a gripping and potent debut novel.

A police detective pursues a serial killer stalking the streets of a south Chicago neighborhood and learns that what first looked to be random murders are not random at all. It’s urban Chicago circa 1995, and a street-savvy police detective, Kyle McNally, has the lead on a task force following the trail of an interstate serial killer. The investigation follows McNally and his antagonist, appropriately tagged “Slugger”, through a maze of suspects, political conspiracies, and unconscionable human greed. Time is against McNally, and with each new victim, the heat on him from his commander increases.

The story exudes a noir detective aura populated by a supporting cast of criminals, cohorts, and dark city scenes that will strike a familiar chord with crime detective story enthusiasts.

With the capture, interrogation, and disappointing release of each new suspect, McNally’s frustration and desperation deepen. He must overcome the loss of two partners and his own personal demons before he can crawl inside the killer’s head and solve the case.

During the investigation, he meets a feisty but attractive medical examiner, Dr. Mykel Hartley, with a reputation as a man hater. After overcoming their early dislike for each other, a relationship develops between them. But it is Dr. Hartley’s own secret past that may ultimately hold the identity of the evil genius, the Slugger.

Published by Page Publishing, M. Brooke McCullough and J.E. Boydston’s engrossing tale is a spellbinding whodunit that keeps the pages turning until the dramatic conclusion.

“In this debut Chicago-set crime novel, police nickname a brutal serial killer Slugger because he beats his victims with a ‘bat-like weapon’ and leaves a folded, collectible baseball card...fans of gritty crime stories and methodical police work will find the book a page-turner, complete with notable characters, dialogue, and descriptions (“He guessed her at six foot two and skinny as a Ball Park frank”). Names and depictions of Chicago attractions and streets are accurate, with the exception that Canarytown is most likely a stand-in for Canaryville, a community on the city’s South Side that was originally a largely Irish neighborhood. The authors hit this one out of the park; a highly recommended mystery.” —Kirkus Indie

Readers who wish to experience this engaging work can purchase “Canarytown: City of Grief” at bookstores everywhere, or online at the Apple iTunes Store, Amazon, Google Play, or Barnes and Noble.