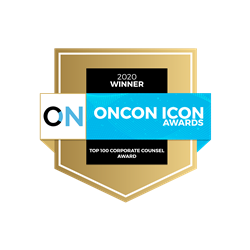 "Laurie's extensive knowledge, experience and expertise in this field has set PaymentVision apart from the competition." - Rob Pollin, CEO

Laurie Nelson continues to demonstrate expertise across the legal and regulatory space within the payment and technology industry. This is yet another accomplishment across the long list of accolades Laurie has received. "Laurie's extensive knowledge, experience and expertise in this field has set PaymentVision apart from the competition." - Rob Pollin, CEO

Laurie Nelson has over 15 years of experience as the lead general counsel to financial institutions, governed and touched by the many different laws and regulations in place today. At her current position, Laurie is responsible for ensuring Autoscribe Corporation’s two divisions’, PaymentVision and Lyons Commercial Data, compliance with all applicable laws and regulations, and the oversight of risk management. In 2015 and 2016 she received an “Executive of the Year” Stevie Award; in 2015 she was named “Legal Executive of the Year by Best in Biz; and in 2016 she was listed as an “Ultimate Attorney” by the Jacksonville Business Journal. Most recently, Corporate Counsel and InsideCounsel named Laurie as an honoree at their 2019 Women, Influence & Power in Law Awards (formerly known as the National Women in Law Awards).

"OnCon Icon Award Winners are determined by peer to peer votes. This year's OnCon Icon Award Winners were determined from over 4,500 votes in total. It is a tremendous honor to be selected as an award winner, as the selection is based off of peer recognition of performance, impact, and contributions. Winners represent many of the most senior leaders from the world's top organizations. Company winners represent the best vendors as determined by the end user." - Sean Tomarelli, Founder & CEO at OnConferences