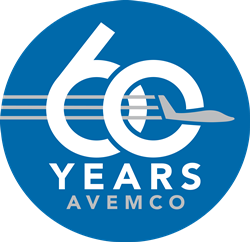 2021 marks Avemco Insurance Company’s 60th year as the only direct writer of aircraft insurance in the United States.

Since its founding in 1961, Avemco has grown to become one of the most widely recognized aviation insurers in the country serving the private pilot community. Today, it has a financial strength rating of “A++ (Superior)” from A.M. Best, a leading credit rating agency focused on the insurance industry.

Avemco was founded in Montgomery County, Maryland, as the Aviation Employees Corporation. Later renamed Avemco Insurance Company, the organization relocated to Frederick, Maryland, in 1982. Avemco has maintained its national headquarters in Frederick, ever since despite several changes in corporate leadership, including the acquisition by Tokio Marine HCC in 1997. Initially, the company’s offices overlooked the runways at Frederick Municipal Airport, before relocating to its current location at 8490 Progress Drive.

Since its founding, Avemco has maintained its focus of insuring the pilots and operators of General Aviation aircraft, specializing in liability and physical damage coverage for single- and multi-engine piston-powered land and seaplanes, gliders, experimental aircraft, instructors, and flying clubs. The company has generated a loyal following among its policyholders with more than 50% insured for five years or longer. Dozens of customers have been Avemco policyholders for as long as 40 continuous years. The company has also retained a loyal base of employees, some of whom have been with the company for more than 40 years.

Over the years, many aviation luminaries and retired U.S. Air Force generals have served on Avemco’s Board of Directors, including a retired NASA astronaut.

Avemco is recognized as a leader in the aviation industry for its commitment to encouraging pilot safety. The company sponsors safety webinars, in-person seminars, and other educational series designed to raise awareness of how pilots can protect themselves and their families by flying safely. Among Avemco’s initiatives is the support of the FAA’s WINGS - Pilot Proficiency Program. The company also regularly publishes safety articles by noted certified flying instructors (CFIs), aviation experts, and Avemco staff.