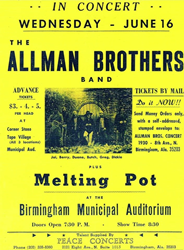 Avid 1960's poster collector announces his search for authentic 1970 and 1971 Birmingham, Alabama Allman Brothers concert posters. After the release of their first album, the Allman Brothers played at the Oporto Avenue Auditorium and the Birmingham Municipal Auditorium. According to Hawley, "A friend of mine, from Alabama, attended to both shows. The November 25 show was held at a small venue, and the audience mingled with the band after the show. The June 16 show was different. The band packed venues across the country and were blowing audiences away with their bluesy, improvisational Southern-style rock n roll. Duane Allman's fame was spreading with collaborations with Aretha Franklin, Boz Scaggs, Laura Nyro, and Herbie Mann. His big break was playing with Eric Clapton on his Derek and the Dominos album "Layla." The Birmingham concert was highly anticipated and sold out."

Hawley adds, "My friend mentioned that the Birmingham authorities were new to rock concerts, particularly with a band with of Allman's fame and notoriety. The crowd wanted the lights turned off, and the police and fire department did not. There was a stand-off with the audience getting restless and a riot almost breaking out when the band's bassist, Berry Oakley, walked out and said they had made a deal with the police. The police agreed to turn off the lights, and the band would be allowed to play one more song. The lights when down and the band played "Whipping Post" for 45 minutes. The crowd left happy."

Hawley will pay $3000 cash for original Allman Brothers 1970 and 1971 Birmingham concert posters. Any condition would be accepted. Please call 310-346-1965 or email andrew at vintageconcertposterbuyer.com.