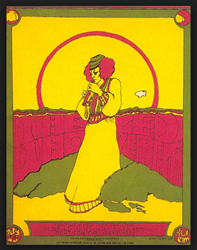 Avid collector, Andrew Hawley from Vintage Rock Posters, announces his search for original 1969 psychedelic Led Zeppelin Merriweather Post Pavilion concert posters. Led Zeppelin was on their first album tour after the release of Led Zeppelin I. The show was on May 25. According to Hawley, "The Pavilion was named after Marjorie Merriweather Post, who at one time was the richest woman in America. She owned General Foods, Inc., and was a major benefactor of the National Symphony. Her summer home built in the 1920s in Palm Springs in the now the Winter White House for the Trump Presidency. The Merriweather Post Pavillon has top-notch acoustics and is the summer home of the National Symphony. In the 1960s, some of rock n' rolls tops acts played there. The Who and Zeppelin only shared a stage once. The Who just released their Tommy album was the better known of the two bands. Zeppelin opened the concert and played many of the songs on their first album. They had to be forced off the stage so the Who could come on stage and perform. Zeppelin's reluctance to leave is probably why the two bands never played together on the same stage again."

Hawley adds, "The poster designed by local artist Tina Silva is a pastel silkscreen masterpiece using a mix of greens, yellows, and pinks on the 20 x 28-inch layout. The layout is considered one of the most beautiful and whimsical psychedelic concert posters produced in the 1960s." For examples of Led Zeppelin psychedelic posters, go to http://www.vintageconcertposterbuyer.com/psychedelic/led_zeppelin.html

If you have an original Led Zeppelin Merriweather Post Pavilion concert poster, Hawley is willing to pay $5,000 cash for each concert poster. He is also seeking other authentic 1969-1972 Zeppelin concert posters. Please call 310-346-1965 or email andrew (at) vintageconcertposterbuyer.com.