Persons owning real estate in California need a trust to avoid costly and lengthy legal action in probate court. A trust need not be expensive or complicated. An affordable, basic trust is a wise investment when the seven deadly sins are avoided as explained in this Tip Sheet by Mark W. Bidwell. 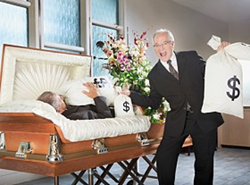 Greed, the deadliest of the seven sins.

Avoid the seven deadly sins of pride, sloth, lust, envy, wrath, gluttony and greed when you prepare your trust.

Mark W. Bidwell, an attorney licensed in California, identifies how to avoid the seven deadly sins in a trust. The primary purpose of a revocable trust is for the timely, economical and orderly transfer of assets when one dies. But the sins of pride, sloth, lust, envy, wrath, gluttony and greed defeat this purpose.

Ruling from the grave may be appropriate. The classic example is the drug addicted child. Any money given to the child will only go to drugs and most likely kill the child. Here detailed restrictions and safeguards are needed.

But ruling from the grave that comes not from a place of caring, but from a sense of
ego creates hardship and bitterness. The parent while living had little influence on a child. A last shot at control is on death, the withholding of assets until an event occurs; such as marriage, a college degree or birth of a grandchild. This is akin to withholding of love with the same effects.

The third sin is feeding the lust of youth. Persons under 18 years of age cannot receive assets. Any distributions directly to a minor will go through probate under court supervision. While the assets are under supervision of the court they are not wasted. But at age 18, the court must release the assets to the minor. The minor then spends the assets to feed his or her lust for life.

If there is a potential distribution to a minor, the trust should have a “children’s trust” provision. A children’s trust keeps the minor’s assets under control of the trust until the child has reached an age of financial maturity, such as 25 years.

The fourth sin of envy is created by one trust when there are children from a prior marriage. Often persons in their second marriage create one trust. Typically, the trust does not provide for distribution to children on the death of the first spouse. This is because the surviving spouse needs to live on the assets of the marriage.

The typical trust can be changed by the surviving spouse and in the process of change, the terms of the trust are less favorable to children of the deceased spouse. Spouses with children from a prior marriage should avoid a joint trust. This means two trusts at twice the cost. But both surviving spouse and children will be protected.

The fifth sin is wrath incurred by an amendment instead of a restatement.
Amendments must be read with the original. The heirs see what they would have received and what they now receive. The situation causes wrath in the heirs who receive less and is ripe for litigation or at the very least, creates bitter resentment. Restatement replaces the entire prior document and does not waive red flags in the face of heirs.

The sixth sin is gluttony and undue influence. People will put off their estate planning until their later years. In the later years, objectivity is lost and dependency on others is created. Persons befriend the elderly in anticipation of a windfall at death. Heirs’ and friends’ gluttony for the elder’s assets only increase as the elder's capacity decreases. Trusts and wills should be prepared while the elder has capacity. Subsequent changes should only be made judiciously when there is a substantial change in circumstance.

The seventh sin is greed. Sibling rivalries create greed for the deceased parent’s assets. One child feels entitled and wants more than the parent intended. If there are unequal distribution of assets or an entitled child, the parent should address why he or she made the decision to distributed the assets as provided in the trust or will. This can be either while the parent is living, in writing to be read after death or both.

The primary purpose of a trust is for the timely, economical and orderly transfer of assets when one dies. But the sins of pride, sloth, lust, envy, wrath, gluttony and greed defeat this purpose. An affordable, basic trust is a wise investment when the seven deadly sins are avoided.