“Hook, Line, and Supper” is a complete resource offering basic guidelines, new techniques and master recipes for everything caught in lakes, rivers, streams and the sea 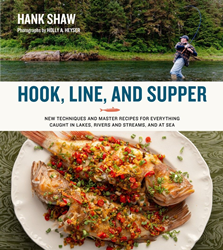 "Hook, Line, and Supper" (H&H Books), perhaps the most comprehensive guide to preparing and cooking fish and seafood, is now available from chef and author Hank Shaw. Shaw runs the James Beard Award-winning website Hunter Angler Gardener Cook and is a nationally known expert in wild foods ranging from wild edible plants and mushrooms to game and of course fish and seafood. "Hook, Line, and Supper" is Shaw’s fifth cookbook and its recipes, tips and techniques will become an indispensable resource for home cooks and anglers of all abilities as they seek ways to prepare fish and seafood in new and consistently delicious ways.

In the new guide, Shaw zeroes in on broad categories of fresh and saltwater fish, detailing how they can substitute for each other. He hammers home the idea of interchangeability and provides clear techniques and carefully developed master recipes to help home cooks improve their skills with fish and seafood. Shaw explores the wide world of flavor combinations and pairings that work with an array of fish and seafood to encourage cooks to successfully freestyle in the kitchen.

"Hook, Line, and Supper" is a compendium for buying, cleaning and cooking fish and seafood from all over North America that even novice cooks will find useful. Shaw explains how best to treat various species from the moment they emerge from the water, how to select them in the market, and how to prep, cut and store them at home.

The new volume contains more than 120 global, yet approachable recipes including tried-and-true standards like fish and chips and smoked salmon, plus international classics like Chinese steamed fish with chiles, English fish pie, Mexican grilled clams, and Indian crab curry. The cookbook also features deeply personal dishes, like a Maine-style clam chowder that has been in Shaw’s family for more than a century, as well as a selection of fish and seafood charcuterie, from fresh sausages and crispy fish-skin chips to terrines and even homemade fish sauce.

Shaw’s love and respect for the water is clear in "Hook, Line, and Supper." From digging clams as a toddler to crossing the continent rod and reel in hand, to even fishing commercially in Alaska, Shaw has developed an expert appreciation for the incredible diversity of fish and seafood on this planet.

“I’ve seen, and eaten, so many different kinds of fish and seafood in so many places over so many years,” Shaw said. “That experience has given me the ability to give to you the ‘deep knowledge’ about fish and seafood as a whole.”

"Hook, Line, and Supper" features photography by both Shaw and Holly A. Heyser, shot all over North America, from Alaska to Florida, Manitoba and the Canadian Rockies to the Texas and Louisiana coast, to lakes and rivers in the Heartland, San Francisco Bay, the Jersey shore and the rocky coastlines of New England.

"Hook, Line, and Supper" will be available in early May wherever books are sold in the U.S., Canada, U.K., Australia and New Zealand. It is available for pre-order now on Shaw’s web site, Amazon and other online booksellers. The 336-page, hardcover cookbook is published by H&H Books and retails for $32.95 USD.

In celebration of the cookbook’s publication, Shaw will host a nationwide series of dinner and book signing events beginning at Sacramento’s Urban Roots Smokehouse and Brewery on May 27. Following that, the book tour will crisscross the United States visiting Alabama, Florida, Wisconsin, Minnesota, North Dakota, Alaska and multiple stops in between. Check the event schedule at honest-food.net for frequent updates.

About Hank Shaw
Hank Shaw is a chef, hunter, angler, forager and wild foods expert constantly on the lookout for new things to gather, catch and eat. At the forefront of the wild foods movement, Shaw, his five cookbooks and his website, "Hunter Angler Gardener Cook" (honest-food.net), are the most authoritative and largest source of tips, techniques and recipes for wild foods of all kinds. From venison to wild mushrooms, waterfowl to upland game, saltwater and freshwater fish, seafood, and edible wild plants, food that you can't buy in the store is Shaw's specialty.

"Hunter Angler Gardener Cook" won the James Beard Award for Best Blog in 2013, after having been nominated in 2009 and 2010. Shaw also won the International Association of Culinary Professionals award for Best Blog in 2010 and 2011, and his cookbook "Pheasant, Quail, Cottontail" won for Best Self-Published Book in 2018. His work was featured in the book Best Food Writing in 2012 and 2013, and his cookbooks "Duck, Duck, Goose" and "Buck, Buck, Moose" won Best Book awards in the Outdoor Writers Association of America's Excellence in Craft Awards. Shaw also served as consulting editor for the fish and wild game sections of the latest edition of "The Joy of Cooking." He cooks, fishes, hunts and gathers near Sacramento, Calif. More information at Honest-Food.net.