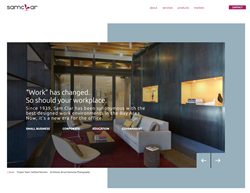 AVA Digital Awards announced winners for the 2020 international awards competition. With a pool of over 2,500 entries from the United States, Canada and 23 other countries, winners were selected from over 200 categories for benchmark-setting excellence in audio, video and web-based production.

Project6 received the highest honor, the Platinum Award, in the category of web-production for its work on the Sam Clar website redesign. This award places Project6 in the same tier of digital creativity that includes BBDO, Warner Bros., Salesforce, Microsoft, and other industry leaders, who were also awarded platinum honors.

The 2020 AVA Platinum Award joins a Gold Davey Award also won by Project6 for its work on Sam Clar. The 2019 Davey Awards, which received nearly 3,000 submissions from around the globe and are overseen by the Academy of Interactive and Visual Arts (AIVA), aims to select the most exciting creative work produced by small shops, firms, and companies each year.

With the addition of these recent honors, Project6 now has received over 90 total awards for excellence in website design and development during the company’s lifetime.

"On behalf of the AVA Digital Awards, I applaud the outstanding work we received. The class of entries from this season truly celebrates how the convergence of creativity, technology and media work together to improve the way the world communicates and shares information," noted Ed Dalheim, AVA Digital Awards representative.

Along with an award-winning website design, Project6 also delivered a full branding and collateral package to Sam Clar, from a logo and style guide to brochures and business cards.

About Project6 Design, Inc.
Project6 is an award-winning San Francisco Bay Area graphic design firm working with tech, retail, education, and nonprofit organizations. Services include branding, print collateral design, and web design and development for a diverse roster of clients such as eBay, Gap, Stanford University, Old Navy, The Siebel Foundation and many others.