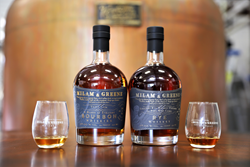 “Bringing Milam & Greene Whiskey to Illinois is a homecoming for us,” says Milam & Greene Whiskey founder Marsha Milam, born and raised in Casey, IL. “As the daughter of a Central Illinois Basin oilman, whiskey was like currency in our house. If anyone did you a favor you gave them a bottle of good whiskey. Now I have some good whiskey of my own. I cannot wait to get back up home and share our whiskey with friends, family, and Illinois whiskey lovers. See you soon!”

“My Irish family worked the railroads and the stockyards of Chicago, helping make it the City of Big Shoulders,” says Heather Greene, CEO and master blender of Milam & Greene Whiskey. “My best childhood memories are of giant Thanksgivings celebrations held with my family in the South Side. My grandmother Hurley had 10 siblings, and there would be something like 50 family members eating together with plenty of whiskey for adults and tomfoolery amongst us kids. I’m glad we can bring Milam & Greene Whiskey to Illinois and hope my family won’t buy it all before the public can get to them. You might want to hurry up.”

Milam and Greene is a truly American Whiskey crafted by an incredible whiskey making team with grains from across the U.S., exquisite Texas Hill Country limestone filtered water and climate, and whiskey aged to optimal maturity in pristine casks in a very unique terroir. The Milam & Greene Whiskey team distills both in their hometown of Blanco, Texas and in master distiller Marlene Holmes’s home state of Kentucky. In addition to distilling on-site and off-site, the team blends, batches, sources, finishes, and hand-bottles. The team plans to introduce its Double Gold winning Milam & Greene Barrel Proof to the Illinois market in the coming months.