Linda Gross Brown starts 2019 with an award, an honorable mention for an “Aritst of the Year” contest and inclusion in a juried spring exhibition 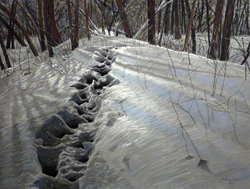 Still in the first month of the year, Linda was announced as a finalist for The Circle Foundation’s “Artist of the Year Award”, placing in the top 150 artists out of more than 850 entrants.

In March she continued her strong beginning to 2019 when "Footsteps #15" was juried into the Academy Center of the Arts 2019 National Juried Exhibition.