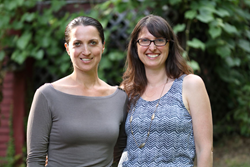 "My sister Emily and I have grown up watching our parents shape Badger into something truly special and enduring. Now, as our father steps into the role of wise founder and supporting visionary, it's an honor for my sister and me to co-lead Badger’s future and strategic visioning"

W.S. Badger Co., the maker of people and planet-friendly body care products since 1995, today announced that Emily Schwerin-Whyte and Rebecca Hamilton, daughters of founder and CEO Bill Whyte and COO Katie Schwerin, have been named co-CEOs of the family-owned business. Bill Whyte will continue in the role as founder of the company and Katie will remain as its chief operating officer.

Succession planning that incorporates co-CEOs is not unheard of for second-generation, family-owned businesses. However, true to its roots of collaboration, transparency, and individual responsibility in a team concept, Badger’s version of the title is ‘collaborative executive officer.’

In addressing company employees, Bill states “My new title is, ‘founder.’ To me, that’s profound, and it says it all, that I had the persistence and good fortune to turn an idea into reality and that I had the support of a community of good people who helped make that vision far greater and more successful than I ever imagined.”

It was twenty-three years ago that Bill Whyte, a carpenter at the time, created a single, simple balm that today has grown into a global business with over one hundred natural and organic products, ranging from lip and body balms to hair oils, bug repellents, and award-winning mineral sunscreens. Badger is equally known for its unique company philosophy, pioneering family-friendly benefits, and B Corp community engagement, all of which has earned it numerous awards and recognition, including landing a spot on Forbes’ “Small Giants 2017: America’s Best Small Companies” list.

“My sister Emily and I have grown up watching our parents shape Badger into something truly special and enduring. And for the past decade, we've been fortunate to work alongside them, helping to guide operations and long-term strategic planning while gaining experience as leaders in our industry. Now, as our father steps into the role of wise founder and supporting visionary, it's an honor for my sister and me to co-lead Badger’s future and strategic visioning,” says Rebecca Hamilton, co-CEO.

For new co-CEOs Emily and Rebecca, as well as for Badger employees, day-to-day operations at the Company will remain much the same, with both daughters retaining their current roles of vice president of sales and marketing, and vice president of research and product development respectively. However, as part of co-leading Badger, both will take a more active, public-facing role in representing the company and ensuring its continued growth and success.

Bill notes, “CEO carry's a great weight and responsibility. They hold the well-being of the company as a whole, and they take action to keep us steady whatever comes our way! And they do all of this in consultation with and with the support of all of us. Really, my daughters Emily and Rebecca and wife Katie have been doing this for years.”

About Badger
Badger is a family run and family-friendly company that has been making healthy products for people and the planet since 1995. Badger was born when Badger Bill, a carpenter at the time, created a recipe of natural ingredients strong enough to soothe his rough, dry, cracked hands. Now a team of over 100 employees, the company produces sunscreens and nearly 100 hundred personal care products at its headquarters in Gilsum, N.H. Inherent in Badger’s DNA is its status as a B Corp, a certification earned through B Lab, a third party non-profit that requires companies to meet rigorous standards of transparency as well as environmental and social performance. Badger has been a certified B Corp since 2011 and in 2015 became one of New Hampshire’s first businesses to register legally as a Benefit Corporation, a for-profit status that incorporates the pursuit of positive environmental and social impact in addition to profit. For more information, visit Badger at badgerbalm.com and follow on Facebook, Twitter, and Instagram.