The iconic California Tower in Balboa Park has reopened for public tours following the completion of a seismic retrofit of the historic structure by the City of San Diego. 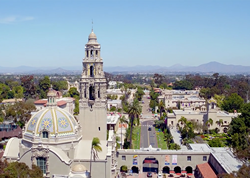 The historic California Tower at the Museum of Man is the iconic symbol for San Diego's Balboa Park. Visitors can now tour the tower and enjoy amazing 360 degree views of the region.

“We thank the City of San Diego for their partnership and investment in preserving the California Tower–one of the City’s most iconic cultural landmarks,” said Micah Parzen, Chief Executive Officer of the San Diego Museum of Man.

Built for the Panama-California Exposition of 1915, the California Tower is the most recognizable structure among the national historic landmark buildings at the Balboa Park campus, many of which now house a variety of non-profit arts, science, and culture organizations. Balboa Park is one of the most visited destinations in Southern California due to its unique mix of cultural venues including the San Diego Museum of Man, plus outdoor recreational activities, the San Diego Zoo, and much more, within its 1,200 acres.

Previously closed to public access, the California Tower opened for tours in January 2015. The most recent, yearlong closure was necessary to improve the tower’s seismic capabilities, which will help fortify the tower against potential earthquake damage, preserving the iconic San Diego landmark and enhancing the safety of museum visitors, staff, and the public.

“Since 2015, our tower tours have provided over 130,000 visitors from around the world the opportunity to experience the Museum of Man and San Diego in a fun and dynamic way, and we are so pleased to once again be offering these tours to the public,” said Micah Parzen, Chief Executive Officer of the San Diego Museum of Man. “We thank the City of San Diego for their partnership and investment in preserving the California Tower–one of the City’s most iconic cultural landmarks. We look forward to welcoming countless more visitors to experience these one-of-a-kind tours for many years to come.”

Peter Comiskey, Executive Director of the Balboa Park Cultural Partnership, added “We are absolutely thrilled to have the California Tower open for tours again! The tower is a spectacular addition to every visit to Balboa Park, and should not be missed.”

California Tower tours will feature a brand-new experience that highlights the histories of many of San Diego’s diverse communities, while still culminating with the spectacular 360-degree views of San Diego from the eighth-floor viewing deck. Tours are offered ten times per day during the Museum of Man’s regular hours of operation, from 10 a.m. to 5 p.m. Twelve guests can be accommodated on each tour.

ABOUT THE SAN DIEGO MUSEUM OF MAN
The San Diego Museum of Man is a cultural anthropology museum that explores the human experience from multicultural perspectives to spark dialogue, self-reflection, and human connections. The Museum’s mission is to inspire human connections by exploring the human experience. Its vision is to be San Diego’s dynamic place to go to learn from each other, reflect on our place in the world, and build a better community. The Museum has been a staple in Balboa Park since it was completed for the 1915 Panama-California Exposition and was designed by noted architect Bertram Goodhue. For more information, visit http://www.museumofman.org.

ABOUT BALBOA PARK
Located near downtown San Diego, Balboa Park is the largest urban cultural park in the United States. First established by the City of San Diego in 1868, it is also one of the oldest city parks in the nation and is the most visited single destination in San Diego. Its 1,200 acres include 17 museums, many gardens and attractions, the San Diego Zoo, 65 miles of hiking trails, and multiple athletic complexes to explore and discover. For more information, visit http://www.balboapark.org.