Film from 3 Roads Communications involves 25 years, 48 states, vintage home movies, and an RV as the star. 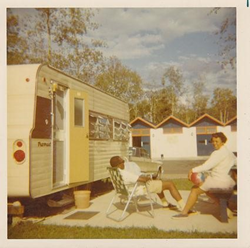 “I see my documentary ‘Everyone But Two’ as a call to the African-American community to put aside the reservations they may have about traveling somewhere in the United States where they don’t see anyone like themselves and recognize that they, too, belong in those spaces." - Carla Brown

Visual artist and Baltimore native Carla Brown is busy these days putting the finishing touches on her documentary tribute to her grandparents Frances and Benjamin Graham.

What is helping to inspire her as she toils away is the image of Jennifer Lopez belting out “This Land is Your Land” at the Biden Inauguration ceremony, which Brown says perfectly captures the message that her grandparents were trying to send to African Americans throughout the United States by traveling the country in their trusty RV oftentimes going to places in the U.S. where African Americans had never been seen before.

Brown says that during their annual trips her grandparents saw themselves as ambassadors from the African-American community to people who had not met Black people before.

Says Brown, “I see my documentary ‘Everyone But Two’ as a call to the African-American community to put aside the reservations they may have about traveling somewhere in the United States where they don’t see anyone like themselves and recognize that they, too, belong in those spaces. After seeing ‘Everyone But Two,’ I would love for someone to walk away and say I want to go see this place with no reservations about it.”

WHAT:
*The documentary "Everyone But Two," currently in the final stages of production, tells the personal story of filmmaker Carla Brown’s African-American grandparents—Frances and Benjamin Graham--who began a 35-year-journey traveling around the 48 continental United States in their RV the same week that Lyndon Johnson signed the Civil Rights Act

*Brown says that given the current climate she thinks it’s very important for people in the United States to see people who don’t look like them—and to realize that what they have seen to-date via the media are stereotypes that lead them to believe that Black people only murder or sell drugs.

*Benjamin Graham is still alive at age 94—and the one-time postal carrier, who integrated a neighborhood in Baltimore in his role as a postal carrier--still lives in that city. He kept a meticulous, handwritten log of his annual RV travels until they ended in 2003. Frances Graham passed away in 2016.

*The Grahams were guided in their annual journeys by “The Green Book,” the subject of the recent Academy Award-winning movie, written by a postal carrier like Benjamin Graham, that laid out in detail “safe” restaurants to eat in and hotels to stay in for people of color, assisting the Grahams in obtaining safe passage throughout the United States.

*Brown—who accompanied her grandparents on some of their annual trips—says she learned what it meant to be Black in America while traveling via the trailer.

*In certain parts of the United States her grandparents were the first African Americans that local residents had ever seen. Benjamin Graham felt that once the initially-curious people got to know them and visited them at their trailer—where Brown’s grandmother Frances paid particular attention to her curtains and doilies—that a warm, cordial feeling would replace the initial curiosity.

Brown says that her grandparents’ overall feeling was that the United States was just as much their country as anyone else’s and that they had a right to see it and savor it.