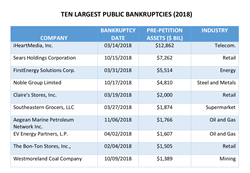 The number of public companies and assets filing for bankruptcy protection in 2018 fell for the second year in a row, with the volume of pre-petition assets* halving from the year before to its lowest level since 2013, analysis by New Generation Research’s BankruptcyData shows.

However, most experts believe that this trend of falling bankruptcy filings will reverse in 2019, as a combination of the retail sector’s continuing woes, tightening debt markets, and large volumes of lower quality bond and bank debt coming due take their toll on the health of corporate America. “We expect to see the pace of bankruptcy filings pick up even more as we go into 2019,” predicts George Putnam, founder and publisher of The Turnaround Letter, Distressed Company Alert and BankruptcyData. Putnam continues:

“As we have discussed before, a huge amount of lower quality bond and bank debt—approximately $1.7 trillion principal amount—comes due over the next five years. Until recently, the debt markets were very forgiving, suggesting that much of the debt could be refinanced fairly easily. However, the recent market volatility has spooked not only the equity markets, but the debt markets as well. As a result, high yield debt issuance dwindled to almost nothing in November and December.”

“Moreover, high yield bond investors are now realizing that the relatively low interest yields they have been receiving do not adequately compensate them for the risk of future defaults. Unless the debt markets return to the blissful, carefree ways of the last few years—which we think unlikely—many of the debt issues coming due in 2019 will not get refinanced and will end up defaulting. Should the Federal Reserve raise interest rates further or the economy soften, defaults and bankruptcies will pile up even faster.”

In 2018 among the 58 public bankruptcies there were a total of three conversions (Erin Energy, JRjr33 and Encompass Compliance) and two dismissals (Worthington Energy and BioAmber). There were 13 public companies that filed a petition in 2018 and emerged from bankruptcy in 2018. The shortest stay was Rand Logistics, Inc. who filed January 29, 2018 and had a plan effective date of March 1, 2018. This bulk shipping company prides itself on speed.

Just as in 2017, last year’s top 10 public company Chapter 7 and Chapter 11 filings were dominated by the oil & gas/energy and retail/supermarket sectors, with these two comprising 70% of the filings. The other sectors represented in the top 10 were telecommunications (with the largest 2018 bankruptcy of iHeartMedia with almost $13 billion of pre-petition assets), steel & metals, and mining. It’s important to note that a Chapter 15 found its way to the top 10, Noble Group Limited filed in the Southern District of New York with just under $5 billion in pre-petition assets.

Looking at energy, the oil price plunge beginning in 2014 has forced hundreds of North American producers, mid-streamers and oilfield services companies to seek bankruptcy protection and this continued in 2018. Big names in this sector filing Chapter 11 in 2018 included Aegean Marine Petroleum Network, EV Energy Partners, Parker Drilling Company, and EXCO Resources, representing over $10 billion in pre-petition assets. Though there seemed some relief for the sector earlier in 2018 as the oil price steadily rose above $80 per barrel, a precipitous fall in prices towards the end of the year presages further hard times ahead in 2019.

Haynes and Boone, a global law firm which has tracked 160 North American oil and gas producers that have filed for bankruptcy since the beginning of 2015, notes in a recent report that while exploration and production (E&P) bankruptcy filings decreased significantly in 2017 and 2018 compared with 2016, the debt administered in last year’s E&P filings is substantial.

Retail, unsurprisingly, fared badly again in 2018, as major retailers that are riddled with debt from leveraged buyouts continued to fall like dominos as consumers take more of their business online.

Three of the year’s largest top 10 public bankruptcies were in retail: Sears Holdings Corporation, Claire’s Stores, and Bon-Ton Stores, representing around $11 billion in pre-petition assets; other notable retail names included Mattress Firm, Nine West Holdings, Walking Company Holdings, and David’s Bridal. In all, there were 14 (8 public and 6 private) retail bankruptcy filings in the US in 2018. This represented 10% of the year’s total public and notable private bankruptcies, compared with 11% in 2017.

Few expect much of a let-up in 2019, with names like Neiman Marcus seen in danger of being forced to seek protection. Neiman Marcius has been on our radar since its first reporting of a low rating in 2009 with distress coverage picking up immensely in 2018. Other name brands like J.C. Penney Company, Inc., GNC Holdings, Inc., Rite Aid Corporation, and many others have multiple distress indicators that were touched upon this past year.

Healthcare & Medical continued to suffer in 2018, representing 9% of the total public and private bankruptcies, as regulatory changes, technological advances, and the rise of urgent-care centers combined to create a “perfect storm” for the sector. The three largest public bankruptcies were Great Basin Scientific, Hooper Holmes, and Orion HealthCorp.

A recent report by Am Law 100 firm Polsinelli shows how healthcare has decoupled from the general US economy, with eight of the past eleven quarters registering a jump in the industry’s economic distress. “The Indices… detail that more than 20 hospitals have filed for bankruptcy since 2016, and 75% of them are in rural areas where reimbursement rates are falling, and the uninsured population is growing. The southwestern states are being hit the hardest with a significant number of rural health care facilities closing and additional Medicare expansion troubles,” said Polsinelli in a press release accompanying the report.

“While many of these cases are not the mega cases with the mega fees that receive a lot of attention, the distressed healthcare bankruptcies are the core of national, regional and, local bankruptcy practices in 2018. I am a convert. The hype is real,” Chris Ward, Partner at Polsinelli, told Petition.

Ben Schlafman, Chief Operations Officer at New Generation Research, Inc. comments, “The influx of healthcare and medical companies filing bankruptcy is real. A simple run of numbers over the last few years on the BankruptcyData platform shows 2018 holds yet another increase in this sector. The tally has been steadily increasing since 2016.”

In 2018 there were seven pre-packaged or pre-negotiated public company Chapter 11 restructurings, or 10% of the total, which was down from the 23% employing this technique in 2017. This expedited and less-costly bankruptcy approach is possible when a company and its creditors can agree on the key terms of a plan of reorganization before the company files its Chapter 11 petition. Given that bankruptcy is an expensive business—the total paid to professionals during Toys "R" Us’ 15-month-long bankruptcy process now exceeds $375 million—such an approach is viewed as an increasingly favored, though sadly not always possible, alternative.

Jim Hammond, Chief Executive Officer at New Generation Research, Inc. states, “2019 we will see more small and mid-sized companies filing bankruptcy, these companies will retain professionals that are actively working in the larger cases. Pre-packaged filings in the mid-size private company arena will continue to grow as it is a more cost and time effective effort to deriving a post-bankruptcy solution.”

In general, while BankruptcyData does anticipate an increase in bankruptcies in the coming year, George Putnam does not expect to see a sharp spike up in defaults like the one experienced in 2008-09 (which was followed by an almost equally sharp decline in defaults in 2009-10). “Rather, we expect the growth in bankruptcies to be more gradual and probably extend over several years. If we are correct, this will create a very favorable environment for turnaround and distressed securities investors for a number of years to come,” he concludes.

Disclaimer: BankruptcyData collects its information from the U.S. Bankruptcy Court and the SEC. Although sources are believed to be reliable, accuracy cannot be guaranteed. New Generation Research thoroughly analyzed and audited all bankruptcy figures and statistics; however, certain details may require adjustment pending untimely SEC reporting and/or delayed U.S. Bankruptcy Court docketing.

News media are welcome to reproduce information provided in this release, with appropriate sourcing. Additional statistics and/or queries are available upon request.

Bankruptcy Filings 10 YearsNumber of filings per year and total assets