Barbie, The Doll We All Love, Turned 60!

The antiques experts at Kovels celebrated Barbie’s 60th birthday on March 9. With more than 150 careers on her resume (think Barbie clothing and accessories!), the doll reflects how women’s careers have changed since the 1950s. 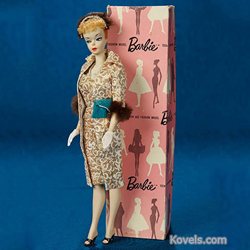 This Barbie No. 2, with box, brought a whopping $6,325 at a recent Theriault’s auction in Chicago.

Barbie creator, Ruth Handler, and husband, Elliot Handler, founded Mattel Creations in 1945. She was inspired to design the Barbie doll after watching her daughter play with paper dolls. Most dolls made for children were baby dolls, not fashion models. The first Barbie was introduced at the American International Toy Fair in New York on March 9, 1959. This date is considered her official birthday.

Barbie’s look was inspired by Bild Lilli, a German doll based on a comic strip character that Handler bought in Europe in 1956. Mattel purchased the rights to Bild Lilli in 1964. (Bild Lilli dolls from 1952 to 1964 have their own collectors.)

The original Barbie, No. 1 as she is known by collectors, is easily identified in its black and white striped bathing suit. It had copper tubes in its legs and holes in its feet, enabling it to be upright in a stand. No. 2 Barbie, released the next year, no longer had holes in her feet and sported a different wire stand. A Barbie No. 1 with a brunette ponytail recently auctioned for $4,600, nearly double its high estimate. And, depending on rarity and condition, her fashion accessories can sell for more than a vintage Barbie itself.

Barbie has more than 150 careers on her resume and reflects how women’s careers have changed since the 1950s. She broke the toy “glass ceiling” in 1960 when she worked as an astronaut and went to the moon.

The Barbie pictured here is dressed to party. She is a No. 2 with a blonde ponytail and is wearing the brocade and fur “Evening Splendor” ensemble made from 1959 to 1964. This doll, with box, brought a whopping $6,325 at a recent Theriault’s auction in Chicago.

About Kovels.com
Kovels.com, created by Terry Kovel and her daughter, Kim Kovel, provides collectors and researchers with up-to-date and accurate information on antiques and collectibles. The company was founded in 1953 by Terry Kovel and her late husband, Ralph. Since then, the Kovels have written more than 100 books and hundreds of articles about antiques, including the best-selling annual Kovels’ Antiques & Collectibles Price Guide. Their nationally syndicated antiques and collectibles column is distributed by King Features Syndicate to many newspapers nationwide. Terry and Ralph starred in television series on PBS, the Discovery Channel, and the Home & Garden Television (HGTV). The website, Kovels.com, online since 1998, offers more than a million free prices, and includes a free weekly email, “Kovels Komments.” It gives readers a bird’s-eye view of the market through the latest news, auction reports, a Marks Dictionary, readers’ questions and answers and much more.