Bassist Fumi Tomita Explores the Musical Conception of Charlie Parker with "Celebrating Bird," Due September 25 from Next Level Records

Celebrating the 100th anniversary of jazz icon Charlie Parker, bassist Fumi Tomita shines a sharp new spotlight on some of the practices and innovations that made Parker such a seismic creative force. He and his quartet, featuring saxophonist Dave Detweiler, pianist Art Hirahara, and drummer Jimmy Macbride, present an inspired set of contrafacts -- new melodies, composed upon familiar chord changes -- of classic tunes from Parker's repertoire. 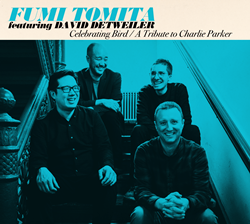 I've always loved Charlie Parker's music. It's a style rooted in a certain language but very open to other styles.

Bird was a legendary creator of contrafacts. One of the bebop revolutionary’s key innovations was the language with which he reimagined songs like “Cherokee,” “Lady Be Good,” and even the basic possibilities of the blues. It’s this spirit that Tomita and his quartet (Detweiler, pianist Art Hirahara, and drummer Jimmy Macbride) channel on "Celebrating Bird," both in terms of writing original songs on classic changes and the expression of those songs in a bright and upbeat bebop aesthetic.

“I’ve always loved Charlie Parker’s music,” Tomita says, musing on the idiom Bird did so much to create. “It’s a style rooted in a certain language but very open to other styles.”

That openness is very much evident on "Celebrating Bird." Whether in the subtle calypso echoes of “Like Sigmund” (a contrafact of Parker’s “Segment”), the Latin charms of “Intersection” (based on “Repetition,” a tune from the famous "Charlie Parker with Strings" sessions), or the funk suggested by Tomita’s doubling of the melody line with Detweiler on “Oceanology” (a blues in C, a favorite Bird framework), the album offers a unique insight into the vast reach of Parker’s musical ideas.

Then again, any jazz performance is also about the musicians performing it in the moment—and Tomita and company do not disappoint as artists in their own right. The glory of Detweiler’s sustained solo on “Bird’s Yard” is immediately rivaled by Hirahara’s piano chaser; Macbride makes punchy but sleek statements on “Bird Dreams”; and the leader taps into fathomless depths of soul with solos on “Alice Changes” and “Intersection.” As ever, the high point of Parker’s genius is in how it enables the individuality of visionaries like Tomita.

Fumi Tomita was born November 26, 1971 in New York. Fittingly for the era, his first musical loves were progressive rock and jazz fusion, which led him to begin on the piano in high school. He soon took up guitar and bass; the latter instrument gained his commitment, which in turn gained Tomita a spot in the jazz performance program at McGill University in Montreal, Canada.

He spent some time as a working musician in Montreal; spent a year in Portland, Oregon; then returned to his hometown in 2000 to earn a master’s degree at Manhattan School of Music (studying with Jay Anderson and Larry Ridley). Being at MSM put him directly in touch with the New York jazz community, and Tomita began working with the likes of Joey Baron, Vincent Herring, Jeremy Pelt, and Art Hirahara. All the while he continued pursuing musical scholarship, finishing his master’s and going on to study ethnomusicology at Hunter College and jazz and contemporary media at Eastman School of Music (where he met tenor saxophonist Dave Detweiler). He ultimately gained a tenure-track position in the jazz program at the University of Massachusetts-Amherst, where he currently teaches.

Tomita’s debut recording, "Untold," appeared in 2011, with Impromptu appearing that same year. (The albums were recorded in 2003 and 2004, respectively). He and Detweiler made their first record together in 2015 on the saxophonist’s "Dave Detweiler Trio." In 2019 came the ambitious "The Elephant Vanishes: Jazz Interpretations of the Short Stories of Haruki Murakami," through which Tomita explored his Asian-American identity. (His father was Japanese; his mother a Chinese-American.) The new "Celebration of Bird" is, in a sense, another examination of identity: that of a contemporary jazz musician who is building on the foundation Charlie Parker laid.

“Conceived before the pandemic, this tribute record to Charlie Parker will, I hope, still be relevant in the new normal with the COVID-19 pandemic,” says Tomita. “The sweeping changes for social justice for African Americans that have dominated the summer of 2020 were a dream that Parker, living during the pre-Civil Rights era, was denied. Yet he still led a musical revolution known as bebop that contributed to the great music known as Jazz. His music can be viewed as a form of protest during an era when African Americans could not voice their opposition to racial discrimination, segregation, or lynchings. During his centennial year, I hope that Charlie Parker will continue to be remembered and that his music will resonate with listeners during an age of protest.”