Bathroom Smell Survey: Nearly One-Third of Men Say They are to Blame for Foul Bathroom Odors

Most men say they aren’t the culprits and blame their spouses for leaving restrooms stinky according to a survey conducted by The Harris Poll for LooLoo, a patent-pending device that automatically keeps toilets smelling fresh while making bathroom air fresheners a thing of the past. 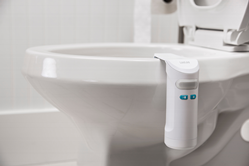 It seems that the older someone gets, the more likely they believe they are the stinkiest in the restroom, so they definitely need LooLoo...the only tech-savvy way available on the market today that solves one of the oldest problems – the smell you leave behind when nature calls.

Two-thirds of men feel they are guiltless when it comes to leaving the worst bathroom smells behind, according to a survey conducted by Harris Insights & Analytics.

The survey was conducted from February 27 to March 1, 2019 on behalf of the LooLoo, the world’s first hands-free and totally-automated toilet freshener.

Other interesting findings in the Harris Survey include the following:

“It seems that the older someone gets, the more likely they believe they are the stinkiest in the restroom,” said Taylor Wood, Co-Founder of LooLoo.

After a successful crowdfunding campaign in 2018, LooLoo is now available at http://www.LooLoo.us. LooLoo keeps toilet bowl odors from ever breaking the surface of the water- stopping the blame game from ever coming up again.

Using an infrared technology, LooLoo is able to sense when someone sits down on the toilet and automatically sprays a thin film of proprietary essential oils on the water – a fragrance blend that both traps the odor under the water and counteracts the odor by absorbing all smelly nitrate molecules.

LooLoo also comes equipped with LED lights that softly illuminate the toilet bowl, with nine colors to choose from, eliminating the jolt of turning on a bright light in the middle of the night.

“Our customers are loving the nightlight," Wood said. "To our surprise, several customers have reached out to us to tell us thank you because LooLoo’s light has helped them potty train their children.

Wood adds that LooLoo is the perfect and convenient solution to keeping the bathroom smelling fresh, whether in the home or at the office, and the modern alternative to aerosol deodorizers that merely mask the smell.

“LooLoo is the only tech-savvy way available on the market today that solves one of the oldest problems – the smell you leave behind when nature calls,” he said.

Survey Method:
This survey was conducted online within the United States by The Harris Poll on behalf of LooLoo from February 27 - March 1, 2019 among 2,031 U.S. adults ages 18 and older. This online survey is not based on a probability sample and therefore no estimate of theoretical sampling error can be calculated. For complete survey methodology, including weighting variables and subgroup sample sizes, please email at hello (at) looloo (dot) us.

About Homeation LLC
Homemation LLC, a Salt Lake City-based innovation company, was co-founded by Taylor Wood and Bryce Johnson in 2017. Wood was previously with Deloitte Consulting- Strategy & Operations, where he worked with an array of fortune 500 companies. Johnson was previously the CEO of Zarbee’s Naturals, where he helped build the Number-1 pediatrician-recommended cough syrup. The company’s first consumer product, the LooLoo, was launched on Kickstarter in 2018, and finished a successful crowdfunding campaign by raising more than $52,000. With a devotion to improving the world’s sanitation problems, a portion of the company’s revenues are dedicated to solving sanitation problems in developing countries. For more information visit https://looloo.us/