Houston, Texas was the location for the Texas Association of Authors’ 2017 award ceremony. Author David Hearne’s book “June 17, 1967 – Battle of Xom Bo II,” was the recipient of first place for its genre. 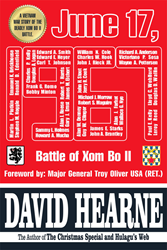 I have been humbled by the many soldiers and readers who have contacted me from across the country who were moved and grateful that I'd wrote about this almost forgotten battle and the young men who fought it.

Author David Hearne was honored by the Texas Association of Authors for his non-fiction book, “June 17, 1967 – Battle of Xom Bo II.” Hearne was awarded first place in his genre for a book that told the true story of a horrific battle fought in Vietnam fifty years ago. The elegant award ceremony was hosted at the Houston Marriott North Saturday Evening July 29, 2017. B. Alan Bourgeois the Association’s founder served as the master-of-ceremony for the event.

The book, “June 17, 1967 – Battle of Xom Bo II,” has been the recipient of numerous literary awards and its subject has awakened many memories for those who lived through the fiery ordeal. The battle of Xom Bo II was a battle pitting about 450 1st Infantry Division soldiers against 800 to 2000 Viet Cong from the 271st Regiment. The bloody clash took the lives of 39 Americans and seriously wounded 150 more. Hearne attempts to give a minute by minute story of what happened that day in the steamy jungle and the story of the men who fought so valiantly to survive the ambush. It is the story of the loved ones left behind and the wounded who struggled to become whole again. It's a story that is the result of talking to many of the survivors of the battle and the wives, brothers, sisters, or friends of those who were there when over 8000 artillery rounds rained down around LZ X-Ray to dislodge the entrenched Viet Cong. It is the story of the youth, culture, and happenings that made the battle of Xom Bo II such an enigma for the summer of love in 1967. David Hearne stated that “I have been humbled by the many soldiers and readers who have contacted me from across the country who were moved and grateful that I'd wrote about this almost forgotten battle and the young men who fought it.”

David Hearne is a multi award winning author of two novels, a book of horror shorts and his latest, a non-fiction book “June 17, 1967 – Battle of Xom Bo II.” David Hearne who is fighting cancer is currently writing a book chronicling his new battle with the goal of educating and comforting others who are also struggling with cancer. He was surprised to discover that there were few easy to read books written for family and patient about how to face cancer. The new book will also cover the correlation between Agent Orange and cancer. The book will be released late 2017.

The Texas Association of Authors (Texas Authors, Inc) is an organization in Texas whose focus is to promote Texas authors to the world. B. Alan Bourgeois, the founder of the organization, leverages the combined knowledge and expertise of the many association members to help guide and promote others Texas authors within the literary world. The Texas Association of Authors is a unique Texas resource available to Texas authors. More information and membership help is available at TxAuthors.com or by calling 512-554-9560.