Award-winning electrical contractor reflects on history, looks to future growth and empowering the next generation of electricians 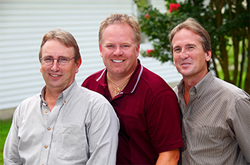 Mark Llewellyn, Thomas Luc, and John Dorsey, who transitioned from co-workers to co-owners when they bought Bausum and Duckett in June 2011.

“When we purchased Bausum and Duckett we were well aware of its legacy and our responsibility to protect it. Having watched the constant expansion of both the services we offer and where we offer them, we also wanted to make sure that we kept growing smartly,” said co-owner Mark Llewellyn.

Bausum and Duckett Electric LLC, one of the DMV’s leading full-service electrical contractors, recently celebrated its 60th year in business, continued growth in the region and dedication to apprenticeship programs.

“When we purchased Bausum and Duckett we were well aware of its legacy and our responsibility to protect it,” said Mark Llewellyn, who bought the business with then-co-workers, now co-owners, Thomas Luc and John Dorsey in June 2011. “Having watched the constant expansion of both the services we offer and where we offer them, we also wanted to make sure that we kept growing as smartly as possible.”

In their nine years of ownership, Llewellyn, Luc, and Dorsey have accomplished this by continuing to lead the company that began as a small residential repair shop in Edgewater, Maryland, into a leader in delivering “power solutions” to large-scale residential and commercial contracting projects throughout the Maryland, Delaware, Washington D.C. and Northern Virginia region.

From D.C. to Delaware, a handful of the company’s most recent high-visibility projects includes the 120,000-square-foot Canopy by Hilton and 145,000-square-foot Hyatt House hotels at The Wharf DC; the 555 Luxury Apartments and citizenM hotel in Southwest D.C.; and Ocean City’s newest hotel, the just-opened Cambria Hotel Ocean City – Bayfront. And while the COVID-19 pandemic has slowed its start, the company also looks forward to beginning work on the University of Maryland Eastern Shore School of Pharmacy and Health Professions in the near future.

To ensure that Bausum and Duckett has the ability to go after and complete such work, its owners have also built on and expanded a tradition of constantly investing in the development of its workforce.

“We know that our employees are what has made and will continue to make our growth and success possible,” said Llewellyn. “We also know that the field is constantly developing, so we do all that we can to not only keep our employees as educated as possible but also help them grow with the company, just as we did.”

Among these efforts, Bausum and Duckett has supported and recruited hundreds of apprentices through Association of Builders and Contractors and the Independent Electrical Contractors four-year apprenticeship programs; regularly participates in annual career fairs throughout Anne Arundel, Montgomery, and Sussex County, as well as D.C.; and provides its employees with ongoing training and continuing education opportunities in the latest technologies, from Bluetooth- and voice-controlled electrical systems to electric charging station installation. It also supports a strong company culture by hosting annual holiday events, naming an Employee of the Month, and encouraging its staff to participate in its philanthropic support of groups such as Wounded Warriors and Faces of Valor.

“We really do think of ourselves as a family,” said Luc. “We’d love to see the future owners come from within the company, just like us, to carry on that tradition for the next 60 years and beyond.”