Be Safe, Choose Datalogic - the Best When It Comes to Safety 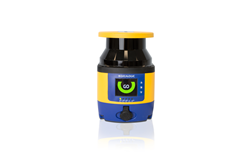 “Among the new features, the possibility to switch dynamically between up to 6 different safety zones, to program reference points for a safe use in vertical applications, and the integration of muting function.” -said Paolo Zanetta, Datalogic Product Marketing Manager.

Datalogic, a global leader in the automatic data capture and process automation markets, is pleased to announce SLS-SA5, the stand alone model of the LASER SENTINEL safety laser scanners family. The first version of the Datalogic innovative solution for safe area scanning, SLS-B5, was released last year, well acclaimed by the manufacturing industry, that appreciated the easy programming of the system with intuitive graphic user interface and the high detection capability.

Today, Datalogic proudly reveals a new model with even more features that will cover a larger variety of applications in factory automation and intralogistics. The world's largest automotive companies have already shown great interest in Datalogic's new Safety Laser Scanner.

SLS-SA5 is a complete application-oriented solution based on the safe monitoring of a two-dimensional area including all functions needed for static horizontal and vertical applications (such as robot cells, machine perimeter protection, machine opening protections, etc.) as well as dynamic applications (automated guided vehicles, automated guided carts and forklifts) in a compact device with high level detection performances. Innovative optical features and signal filtering make the Laser Sentinel extremely reliable in industrial environments where dust, dirt or light interferences can’t be avoided.

“Safety in the manufacturing industry has certainly improved over the last decades, nonetheless the concerns are still numerous and very real. People remain at the center of many processes, despite the increasing automation, and are still very much exposed to serious injuries. By prioritizing safety, a manufacturing company can set the values for the entire workforce. The safety laser scanner is used to detect people who are approaching a hazardous area, before reaching it, in order to prevent hazardous circumstances (for example, a mechanical movement) that may cause injuries or an accident. The protective detection is done by defining a safety area, whose shape and dimensions must be designed according to the risk assessment of the machine. The user must consider the position of the hazardous point, the shape of the machine and the surrounding environment as well as the time needed to stop any dangerous approach,” said Paolo Zanetta, Datalogic Product Marketing Manager. “Among the new features are the possibility to switch dynamically between up to 6 different safety zones, to program reference points for a safe use in vertical applications, and the integration of muting function,” added Zanetta.

Like any other safety product designed and produced by Datalogic, LASER SENTINEL has been certified according to the most recent European safety standard harmonized with the Machine Directive, with the supervision and control of the independent and renowned TÜV SÜD. LASER SENTINEL is also cULus Listed for the Canada and US markets.

Datalogic is a global leader in the automatic data capture and process automation markets, specialized in the designing and production of bar code readers, mobile computers, sensors for detection, measurement and safety, RFID vision and laser marking systems. Datalogic solutions help to increase the efficiency and quality of processes in the Retail, Manufacturing, Transportation & Logistics and Healthcare industries, along the entire value chain.

The world's leading players in the four reference industries use Datalogic products, certain of the attention to the customer and of the quality of the products that the Group has been offering for 45 years.

Today Datalogic Group, headquartered in Bologna (Italy), employs approximately 3,100 staff worldwide, distributed in 30 countries, with manufacturing and repair facilities in the USA, Brazil, Italy, Slovakia, Hungary and Vietnam. In 2017 Datalogic had a turnover of 606 million Euro and invested over 55 million Euros in Research & Development, with an asset of more than 1,200 patents in multiple jurisdictions.

Datalogic and the Datalogic logo are registered trademarks of Datalogic S.p.A. in many countries, including the U.S.A. and the E.U.