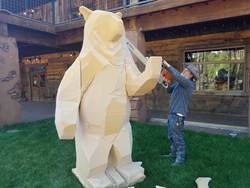 We could not be more thrilled that the new otter habitat will be marked by yet another fantastic LaBenne creation, and we are hopeful that if we build a grizzly bear sculpture, we may attract the opportunity to rescue them in the future. We have been wanting to rescue grizzly bears for years.

Bearizona, a popular wildlife park near the Grand Canyon devoted to providing homes to wild animals in need, is commissioning a famous sculptor family to create a new sculpture for the park in honor of International Sculpture Day on April 27, called “Inspiration Gone Wild,” in the hopes that if a grizzly bear-centric totem is built, the grizzly bears will come.

Josh, Jesse, and Jonathan LaBenne—who has created sculptures for celebrity clients including Robert Redford, George W. Bush, Richard Petty, John Crawford, and Judge Judy, to name a few—have also helped sculpt Bearizona into the experience it is today since the park’s inception in 2009. Among the impressive sculptures and full-scale experiential art installations the Afton, Wyoming family has created for the wildlife park are Canyonlands Restaurant, complete with sculpted canyons, eagles and a black jaguar, and the replica of an old mine that houses Bearizona’s gift shop.

Jonathan “The Bear Man” LaBenne is the patriarch of the artistic family, whose sculptures grace many art galleries throughout mountain regions in the United States and worldwide. He was originally known as a chainsaw artist, but his desire for refinement and detail as well as his passion for relief work began to show as he incorporated grinders, sanders, torches and high-speed carving tools into his trade.

He and his wife, Pamela, who is also an artist, began teaching their children how to create art at a very early age.

“We now have a family of awesome artists!” he says. “But our crown jewel is, undoubtedly, Canyonlands Restaurant at Bearizona.”

The LaBenne family continues to use a variety of materials and tools. At Bearizona, for example, many of the rock sculptures and arches overlay old cars and trucks. The otter mountain in the new otter habitat is built on top of a recycled dump truck, along with old Dodge and Chevy pickup truck parts. The rocks and ledges at Canyonlands Restaurant are also built on steel framing covered in sheet metal, which were later covered with foam, plaster, concrete and other mediums to sculpt the rock walls and ruins.

“One of my favorite things to do is recycle old materials and turn it into something new and beautiful,” LaBenne says. “When I see a totaled car at a junk yard, for example, I immediately start imaging what shape of rock it could be.”

A New Sculpture for Bearizona in Honor of International Sculpture Day: “Inspiration Gone Wild”
Bearizona owner Sean Casey announced today, in honor of International Sculpture Day, he is commissioning the LaBenne family to create a new sculpture called “Inspiration Gone Wild,” which will be on display in the walk-through portion of the park next to the otter habitat. The sculpture will feature a giant grizzly bear at the base of a real tree accompanied by three grizzly bear cubs climbing the tree, who are meeting three friendly otters, curious to see the cubs. A bald eagle on a nest will top off this epic collection of sculpted creatures, harmoniously existing on a single tree.

“There is no question about it: Bearizona would not be the experience it is today without the LaBenne family and their incredible talent and vision,” Casey says. “We could not be more thrilled that the new otter habitat will be marked by yet another fantastic LaBenne creation, and we are hopeful that if we build a grizzly bear sculpture, we may attract the opportunity to rescue them in the future. We have been wanting to rescue grizzly bears for years.”

Since it was founded in 2010, Bearizona has fast-become a must-see attraction when visiting the Grand Canyon’s South Rim or driving through Northern Arizona. It was voted among the top three wildlife parks by the annual USA Today Readers’ Choice Awards twice in the past two years.

A rendering of "Inspiration Gone Wild," the new sculpture Bearizona comissioned the LaBenne family to create.

The future site of the "Inspiration Gone Wild" sculpture at Bearizona, next to the otter habitat.