Beats Per Minute (BPM) INC.'s Kickstarter Campaign for Run-Up Hits 100% of Its Funding Goal in Under 15 Minutes

Backers from over 10 countries have rallied to help Run-Up hit its initial funding goal of $10,000 in under 15 minutes. 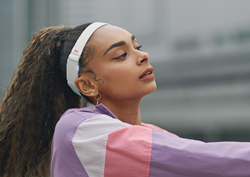 Discounted early-bird reward prices for Run-Up are still available, but the company anticipates these reward tiers to be sold out by the midway point of the campaign.

After a robust pre-launch marketing campaign, Beats Per Minute (BPM) INC. is proud to announce that the company's Kickstarter campaign for Run-Up, a high-performance sports audio wear that features direct audio technology has shot passed its initial funding goal of $10,000. Backers from over 10 different countries have claimed their rewards.

Discounted early-bird reward prices for Run-Up are still available, but the company anticipates these reward tiers to be sold out by the midway point of the campaign. Once the campaign hits $100,000 in funding, the red version of Run-Up will be unlocked for Kickstarter backers.

While audio devices that cater towards people with active lifestyles are available on the market today, they do not have the features and functions that are necesssary for quality and safe use. Run-Up hits both checkpoints with its design and technological features.

The sweatwicking headband absorbs sweat, prevents it from reaching the eyes, and helps you cool down thanks the material and its ventilation stitching pattern. The Run-Up headband is also detachable, which means that users can safely wash the headband after every use so that they can maintain the highest levels of hygeine while working out. This makes it extremely convenient and comfortable to wear for all users.

When it comes to technology, Run-Up features worldclass hardware that uses in-house developed technology and external components that are widely used in existing devices. The small speaker console that is located on both sides of the headband has been engineered to send audio directly to the ear. This should not be mistaken for bone conduction technology. This direct sound delivery is possiblely largely due to the primary sound hole as well as the air vent.

Thanks to the direct sound technology, only Run-Up users will be able to hear the sound coming out of the speakers. While BPM expects most of the Run-Up wearers to use it to listen to music while working out, it can also be used for phone calls as well. This is made possible by the dual mic system that is included in the design.

All of these components combined is what allows Run-Up to be a audio wear that can provide rich audio and still have its users aware of their surroundings. Since it utilizes an open ear audio design, people can enjoy their favorite songs and podcasts or even take a phone call whiel still being able to hear everything that's going on around them.