Beautiful and Emotional New Collection of Poetry is Released

Prolific and award winning poet B.E. Stock has published a selection of lyrics written between 2001 to 2017 allowing readers into her inner most thoughts. 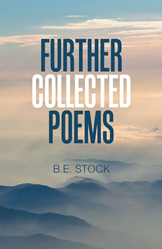 Acclaimed poet B.E. Stock has released her latest book of poetry with “Further Collected Poems.” Her new book presents a meaningful collection of poetry created to provoke simple and complex thoughts as well as emotions ranging from hopeful to tragic with the common thread being a conviction that there is an order and a goodness behind and beyond all absurdity.

In selected lyrics written between 2001 to 2017, Stock allows readers into her inmost thoughts from her life experiences as well as her observations of the events around her during this time, as told through beautiful poems written in and out of form and in many modes and voices.

Many of the poems focus on the sanctity of the individual person, the importance of a God who cares and the centrality of love. Through her poetry, Stock emphasizes the necessity of strenuous work to cooperate with the universe, as well as getting and giving support to hope, to believe and to be one’s best self.

About the Author
B.E. Stock is a prolific and award winning poet who writes in both traditional forms and free verse and has been a poet since childhood. She studied writing at the Bread Load Writers Conference, Sarah Lawrence College (where she received a BA in Creative Writing), the West Chester Conference, and Colrain. She was a student of Alfred Dorn at Brooklyn Poetry Circle as well as a student of folk music and religious music. She has hosted numerous readings in New York City and her work has been widely published in literary periodicals. She published two chapbooks, “Soliloquies” (1992) and “Praise of Leisure” (1996). B.E. Stock’s long narrative poem, “Sally Jordan,” was published by Mellen Poetry Press in 1996 in “Three Women: Touching the Boundaries of Life.” In 2001, she published her “Collected Poems;” and the present volume is selected from poems written between 2001 and 2017. She currently resides in Brooklyn, New York.