Beckwood to Showcase Servo-Electric Press Technologies at The Assembly Show

Visitors to booth 1850 at The Assembly Show in Rosemont, IL will see an EVOx press in action and earn a chance to win a $250 Visa gift card. 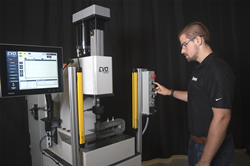 “Attendees at this year’s Assembly Show will be impressed by EVOx's capabilities and ease of use.”

Beckwood Press Company, a leading manufacturer of hydraulic and servo-electric presses, automation systems, and the Triform line of specialty forming equipment, will be showcasing their new EVOx servo-electric press line October 22-24, 2019 at The Assembly Show in Rosemont, IL.

Visitors to booth 1850 will see a 4,000-lbf (2-ton) EVOx press in action and learn how to increase precision and efficiency within their forming process using this technology. Learn about the three modes of operation, and watch the press reach positional accuracy to within +/-0.0005”. Gather instant feedback for diagnostics and maintenance using the data acquisition system which records key performance metrics at a rate of 1000 samples per second. This press will also be available for purchase immediately following the show.

EVOx presses are ideal for light-duty applications that require high precision and strict part traceability. Since EVOx presses use an electro-mechanical actuator in lieu of hydraulics to create force, the risk of oil leaks and part contamination is eliminated, making them optimal for assembly operations in labs, clean rooms, R&D facilities and food handling environments.

“Since its launch in April, the EVOx press line has been well-received throughout the Assembly industry because of the cleanliness, precision, and programmability it offers,” said Beckwood president Jeffrey Debus. “Attendees at this year’s Assembly Show will be impressed by the machine’s capabilities and ease of use.”

Show attendees who view an EVOx demonstration or schedule a private consultation at beckwood.com/assembly-show will be entered into a drawing for a $250 Visa gift card.

About Beckwood Press Company
Beckwood Press Company is a leading manufacturer of hydraulic and servo-electric presses, located in St. Louis, MO - USA. Established in 1976, they offer both standard and custom presses as well as automation equipment for virtually every industry and application, including a line of temperature-controlled presses for compression molding and high-temperature hot forming / SPF applications. Beckwood also manufactures the Triform line of precision forming equipment and the EVOx line of servo-electric presses. Get the latest news from Beckwood at beckwoodpress.com/news.