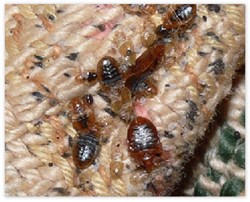 ...when preparing to eliminate the critters, one must only go for an organic bed bug spray...to protect everyone's health and even the environment from harsh chemical ingredients.

Bed bugs were discovered in a Fresno elementary school. And according to a report from abclocal.go.com dated October 15, 2013, the incident got the parents seriously concerned. So, to help, My Cleaning Products suggested a bed bug spray that it said is pesticide-exempt.

In the report, it was specified that the vampire-like crawlies were seen in Olmos Elementary School, My Cleaning Products stated. The suspected source of them, it detailed, was the nearby apartment complex.

The pesky insects, as said in the news post, were sighted particularly in one of the school's classrooms and even on its students, MCP shared. And to clear them, it stated that Fresno unified hired a pest-control company over the weekend. However, it added that the spray treatment wasn't just implemented in the school but also in the housing complex in question.

Below is a part of the post Bed Bugs Sighted in a Fresno Elementary School by My Cleaning Products.

“Bed bugs showed up in an elementary school in Fresno. And in the hope of clearing them, the authorities got the campus sprayed over the weekend. So, now, it's back to full operation.

The affected school was particularly Olmos Elementary School. And according to a report, the pesky creatures were specifically seen in one of its classrooms and even on its students.”

While it's true that schools don't make a great place for bed bugs to infest, My Cleaning Products said that they make good pit-stops to transfer from one person to another and further spread. And so, it warned parents to be cautious as there's always a possibility that their kids would bring home the pests.

Moreover, MCP advised the public to be ready all the time to kill bed bugs. That it said could prevent them from multiplying and causing worse physical, structural and financial problems.

However, it also cited that when preparing to eliminate the critters, one must only go for an organic bed bug spray. It said that's to protect everyone's health and even the environment from harsh chemical ingredients.

But among the organic-based solutions, MCP only recommended Bed Bug Bully. And as it reasoned, that is because it was already proven effective by hotels, hospitals and pest-control companies. Moreover, EPA already acknowledged it as pesticide-exempt and got it listed under FIFRA 25(b).

To prove those benefits true, the site also announced that it was giving out samples of the product. It detailed that anyone could get a Bed Bug Bully Complimentary Sample to test at its official website, MyCleaningProducts.com.