“The Impending Midnight Cry” from Christian Faith Publishing author Befekadu Admassu is a powerful narrative that unveils the approaching apocalypse as foreshadowed by God in the Old and New Testaments. 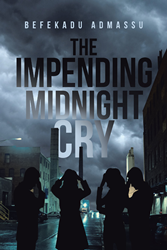 “The Impending Midnight Cry”: an enlightening read that tells of the many signs leading to the world’s end and the fulfillment of end-times prophecies. “The Impending Midnight Cry” is the creation of published author Befekadu Admassu, founder of Voice of Trumpet Ministries, an online Bible teaching, research, community, and church support ministry.

Admassu shares, “The world is in great turmoil. Nuclear cataclysm is a real and present danger, and the talk of a third world war has become all too common even among the most influential personalities. Political instability is shaking the great nations that once claimed to be bastions of democracy and rule of law. Geopolitical rivalry among the superpowers is ripping apart the institutions that ensured relative peace and stability around the globe for the past several decades. Moral decline is destroying the nuclear family and the fabric of society, particularly in the once-Christian West, as more people abandon faith and traditional family values.

“The Jewish prophets of old who penned the books of the Bible not only foresaw the storms that would billow throughout the many millennia that followed their times but also assured us of a beautiful and lasting final outcome. Their predictions have proved true time and again. The most intriguing promise of the prophets was the coming of the Messiah who will rule the world with truth and righteousness. The Gospels tell us an even more audacious story, that the predictions of the prophets actually came true in the birth of Jesus Christ two thousand years ago. The writers of the New Testament have also penned for us the promises of Jesus of Nazareth, the only Son of God, to come back at the end of the age to establish God’s kingdom. Could the turmoil we see today be the very birth pangs that will finally usher in the promised kingdom of God?”

Published by Christian Faith Publishing, Befekadu Admassu’s new book reveals the current state of the world as that of unpreparedness and confusion that makes it even more compelling to adhere to the Lord’s teachings to avoid being caught in sin and downfall.

This book draws incidents parallel to the biblical visions of how the world will ultimately be destroyed to pave a way for the kingdom of God to come and usher the new age.

View the synopsis of “The Impending Midnight Cry” on YouTube.

Consumers can purchase “The Impending Midnight Cry” at traditional brick-and-mortar bookstores or online at Amazon.com, Apple iTunes store, or Barnes and Noble.

For additional information or inquiries about “The Impending Midnight Cry,” contact the Christian Faith Publishing media department at 866-554-0919.