Inaugural Event Will Feature Tarana Burke, Founder of the #MeToo Movement, the Honorable Tahesha Way and Shavar Jeffries with The Man Stand 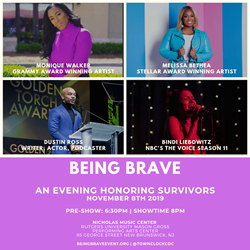 Town Clock CDC is the largest Facility in NJ and 1 of 40 Nationwide offering permanent housing and supportive services for domestic violence survivors and their children.

On Friday, Nov. 8 at 8:00 PM, gospel stars Monique Walker, Melissa Bethea and other advocates will gather at the Nicholas Music Center for an evening of entertainment and inspiration to honor the bravery of domestic violence survivors and supporters at Being Brave – An Evening Honoring Survivors. The event will be hosted by Inside Edition’s Lisa Guerrero and will feature Tarana Burke as she receives the inaugural Tarana Burke Being Brave Award. To find out more about Being Brave, visit http://www.BeingBraveEvent.org.

Being Brave – An Evening Honoring Survivors was created by Town Clock Community Development Corporation(TCCDC) to bring awareness that 57% of homeless women cite domestic violence as the cause of their homelessness. TCCDC’s long-term strategic vision is to establish at least two permanent, affordable, supportive facilities in each of our 50 states. Currently TCCDC is one of only 40 establishments of its kind in the entire United States. When the facility opened in April 2016, it instantly became the largest, permanent housing program for survivors of domestic violence and their children in New Jersey. This event will start as the launch pad for this strategic vision.

Beginning at 6:30 PM, Dustin Ross, co-host of the podcast, The Friend Zone and writer of late-night weekly talk show "The Read with Kid Fury & Crissle" (Fuse network), will host the event’s purple carpet VIP reception, where attendees will mingle with advocates and supporters of domestic violence reform.

Tarana Burke, founder of the #MeToo Movement and recently launched #MeTooVoter campaign will be the first recipient of the Tarana Burke Being Brave Award for outstanding leadership in breaking the cycle of abuse. The event will feature The Man Stand led by Shavar Jeffries, a New Jersey attorney who has dedicated his life to ending Domestic Violence, after his mother was killed by his stepfather in 1985. The men will take the stage and take a stand, shoulder-to-shoulder, to show their support to end the devastating cycle of domestic violence.

Cadillac is the presenting sponsor for Being Brave. In addition, the event is being sponsored by Hilton, White House Black Market, Lucid Bliss, Liquid Hair Salon. PeaK Unleashed and Josefinas, Portugal.

Town Clock Community Development Corporation is a nonprofit, 501(c)3 organization http://www.TownClockCDC.org whose mission is to provide affordable homes and supportive services to survivors of domestic violence and their children. Town Clock CDC transformed the sanctuary of the 200-year-old First Reformed Church of New Brunswick into 10 supportive, long-term affordable housing units for survivors.