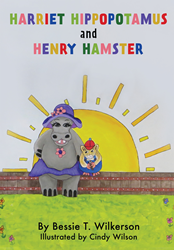 Children will delight in this tale about the importance of helping your friends, and how always being helpful brings us closer to God.

Harriet and Henry are unlikely friends, but they don’t let that stop them. When Henry is hurt, Harriet demonstrates a tender heart by helping her friend.

“Children will delight in this tale about the importance of helping your friends, and how always being helpful brings us closer to God,” said Wilkerson.

Bessie “Terry” Wilkerson is an ordained minister that prefers being outdoors. In 2002 Bessie earned a Master of Education degree in Psychological Studies from Cambridge College. She has worked in the Early Childhood Education/Human Services field for over three decades. She is also the author of several children’s books, including her first entitled The Hungry Squirrel.

Cindy Wilson has been an artist since 2003 and freelance Illustrator since 2012. She has illustrated many Christian children's books. She started designing crosses in 2003 and within six months she was painting on canvases. She says that it’s a gift from God given to her.

Xulon Press, a division of Salem Media Group, is the world’s largest Christian self-publisher, with more than 15,000 titles published to date. Harriet Hippopotamus and Henry Hamster is available online through xulonpress.com/bookstore, amazon.com, and barnesandnoble.com.