Bennie F. Jones, Jr’s newly released “The Pastor & the Rod of Moses” tells of a pastor’s journey through mysticism and tragedy that involves an ancient evil

“The Pastor & the Rod of Moses” from Christian Faith Publishing author Bennie F. Jones, Jr is a riveting book about a pastor who braves through toil and sorrow to stop a malevolent spirit from wreaking havoc. 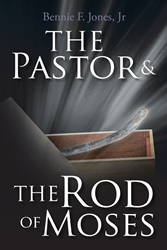 “The Pastor & the Rod of Moses”: a gripping narrative about a pastor who must find a holy artifact to defeat a resurrected demon bent on destroying the world. “The Pastor & the Rod of Moses” is the creation of published author Bennie F. Jones, Jr, a dedicated poet, nuclear weapon specialist for the US Air Force, fingerprint examiner, and facilitator for “Study Circles” on race relations.

Jones, Jr shares, “‘The Pastor and The Rod of Moses’ is a journey of emotions, beliefs, desires, visions, and hopes. It’s a man’s journey through a life of hard breaks, let-downs, realizations, and strife—all while being led by God. Samuel Jones, pastor of Mount Lilla Baptist church in Atlanta, Georgia, is heartbroken when he loses his wife to cancer. Randall Pinckney, a prodigy of archaeological events in Egyptology, discovers a gold tablet of evil spells. During his research, Randall becomes possessed by an evil spirit name Dedi. The pastor’s son, Lil Sam, is killed because he was mistaken to be someone else. Randall, who is now Dedi, speaks an incantation to bring evil spirits from hell to occupy bodies of the recently deceased. Pastor Sam resigns from preaching after losing his family, but gets the Rod of Moses from an old deacon of his church, Willie Armstrong. Sam tells his closest friend Gary, an avid fisherman, about the divine visions and dreams he’s beginning to have. George, a neighbor of Sam, lost both sons in gang-related events and his wife to suicide, drinks heavily because of his loss. Sam has been given the divine ability to see the soul of people but isn’t sure why God gave him that ability. Dedi, in possession of Randall’s body, goes to Arizona to assemble his demonic army. The demonic spirits from hell reap souls from the living as they move toward Arizona. Bob, an FBI agent, is assigned to investigate the missing and drained bodies being reported by local police. These four unlikely friends become family in their effort to find and destroy the golden book of incantations and spells. But this is just the beginning of the story.”

Published by Christian Faith Publishing, Bennie F. Jones, Jr’s new book brings action-packed and thought-provoking moments of religiosity and magic in a pastor’s life that challenges his resolve and faith in God.

View the synopsis of “The Pastor & the Rod of Moses” on YouTube.

Consumers can purchase “The Pastor & the Rod of Moses” at traditional brick-and-mortar bookstores or online at Amazon.com, Apple iTunes store, or Barnes and Noble.

For additional information or inquiries about “The Pastor & the Rod of Moses,” contact the Christian Faith Publishing media department at 866-554-0919.