A big price-cut on a poor-quality TV doesn’t make it a good TV deal. Minimum Recommended Criteria of an HDTV Explained by http://BestLedTvReview.org/ 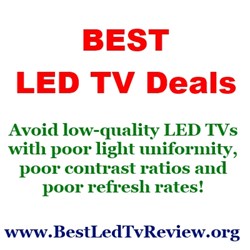 When Americans watch 9 years of TV during a life-time, on average, you can’t justify buying a low-quality LED TV, no matter how cheap it may be.

Finding a cheap flat screen TV is not a difficult task. However, finding a good deal on a high-quality LED TV can be considerably more challenging. While some LED TV deals are on good models with up-to-date tech specs, others are on low-quality models with outdated specs. However, filtering out the best TV deals from the rest can be easily accomplished by paying attention to a few important tech specs.

The list of daily updated LED TV Deals on http://BestLedTvReview.org/Daily-LED-TV-Deals/ is unique in that it categorizes existing deals into 3 different groups, as deals on: (i) mediocre/low-quality LCD TVs, (ii) good-quality LED TVs, and (iii) TVs with excellent picture-quality. They advice that deal hunters avoid the first category of TVs, because they can have various technical problems.

According to the above review, cheap flat screen televisions are cheap for a reason. Some commonly known problems with such cheap TVs are: (i) poor light uniformity - for example, the center is bright while the corners are dark, (ii) poor color contrast – the blacks/dark shades are not dark enough and the whites/lighter shades are not light enough, (iii) dim screens – this is especially a problem during the day time, and (iv) dead pixels – a full HD TV has 1920 X 1080 pixels (~2 million pixels). When pixels are dead, they don’t light up and can be seen as dark spots on the screen. This is why it's advisable to select a television from the 2nd or 3rd categories.

The above categorization is mainly based on the technical specifications, the brand name, picture quality and current customer reviews of each LED television set. Some of the basic, yet important specs one should consider prior to buying an LCD HDTV are its resolution, refresh rate, and contrast ratio. Today, television broadcasts as well as Blue ray movies are available in 1080p high definition resolution and rich, true-to-life colors. One can only appreciate these features if their HDTV hardware is compatible with the video signals. A cheap LED TV may suffer from poor picture quality with poor color uniformity, motion blur and even dead pixels. The guidelines provided on Minimum Recommended Tech Specs of an LED TV is a useful read for anyone looking for good LCD TV deals.

According to available data, Americans watch 5 hours of TV per day on average. That’s 35 hours every week, 150 hours every month, 2.5 months every year and 9 years over an average life span. Considering how much time one spends watching TV, buying a poor-quality TV with the above defects cannot be justified. This is why someone looking for the best TV deals shouldn’t necessarily look for a big price-cut, instead look for a decent discount on a higher-quality television. While it would be nice to have high-end features like micro-dimming, full-array LED backlighting, quad-core processors, ‘Smart’ functions, built-in sub-woofers, surround sound systems, and built-in cameras, like those available on the high-end Samsung F8000 series, not everybody needs them or can afford LCD televisions with such specs. The good news is that there are plenty of deals on high-quality LED HDTVs from well-known brand names like Sony, Samsung, LG, Sharp, and Panasonic that are neither too advanced like the Samsung F8000 series nor too basic like certain models from relatively less popular makes like Seiki, Element, Cielo, and oCosmo. In addition to listing a variety of daily TV deals from many different online merchants, http://BestLedTvReview.org/ also provides detailed reviews on the best LED TVs of 2013 and 2014.

3 Types of LED TV DealsHDTVs from the middle category provide the best value for money, while the first category should be avoided if possible