Dr. Alan I. Benvenisty in New York, New York is an elite vascular surgeon who was recently named a "Regional Top Doctor" by Castle Connolly for 2017. Dr. Benvenisty earned this prestigious recognition for his training, expertise and success in the diagnosis and treatment of numerous vascular diseases, including renal transplant surgery as well as carotid, aneurysm and limb (salvage) bypass surgery. 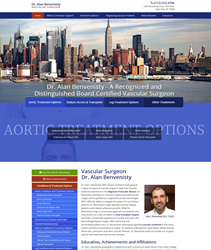 Being awarded as a Castle Connolly’s Top Doctor is an honor I truly value. My intention is to continue to pursue excellence in the rapidly changing field of vascular surgery, which ultimately benefits my patients, says Dr. Alan Benvenisty of New York.

Dr. Alan I. Benvenisty, MD is dual board certified in general surgery and general vascular surgery in New York City. He is known for his distinguished expertise and experience in the diagnosis and treatment of vascular diseases. Beyond his broad specialization in vascular surgery, Dr. Benvenisty holds sub-specialty training in treating renovascular disease and aortic aneurysm. He is known for his minimally invasive surgical techniques and knowledge in endovascular surgery. Dr. Benvenisty’s advanced treatment approaches have helped countless patients avoid dialysis and overcome renal and kidney failure.

Castle Connolly Medical Ltd. has recently recognized Dr. Benvenisty’s unrivaled success in vascular surgery by awarding him as a "Regional Top Doctor" for 2017. Castle Connolly selects the nation's "Top Doctors" based on a peer nomination process and an extensive review by a physician-led research team. Dr. Benvenisty’s medical training, board certifications, achievements, and other credentials were taken into consideration for the award. Castle Connolly has up to 100,000 regional nominees competing in several medical specialties. The “Top Doctor” winner is given the privilege of being featured in numerous media outlets and reputable publications, including the America's Top Doctors® book, online directories, various magazines and multiple national media sources.

Castle Connolly is considered the nation’s most trusted source for finding reputable physician specialists in each region. Dr. Benvenisty has undoubtedly earned his position as a Castle Connolly “Top Doctor” for the field of vascular surgery in New York. Beyond his extensive credentials, achievements and leadership roles in the medical community, Dr. Benvenisty continues to be a pioneer physician in the treatment of vascular disease. While he specializes in vascular surgery and endovascular surgery, he is also a registered vascular technologist (RVT) and considered an expert in renal transplant surgery. Dr. Benvenisty’s super-specialty involves helping patients avoid dialysis whenever possible, even at end stage renal failure. He brings a conservative approach to treatment and intervention, but he also holds noteworthy surgical skills in carotid, aneurysm and limb (salvage) bypass surgery.

“Being awarded as a Castle Connolly’s Top Doctor and included in such a reputable database is an honor I truly value. My intention is to continue to pursue excellence in the rapidly changing field of vascular surgery, which ultimately benefits my patients,” says Dr. Alan Benvenisty of New York.

About Alan I. Benvenisty, MD:
Dr. Alan I. Benvenisty graduated as Valedictorian with summa cum laude honors from Union College in Schenectady, New York. With a Bachelor’s Degree in Biology, he attended the College of Physicians and Surgeons of Columbia University, where he remained to complete his internship and residency in General Surgery. Selected as “Super-Chief,” he completed his Fellowship in Vascular and Transplant Surgery and was invited to join the staff at The Presbyterian Hospital. During his eighteen-year tenure, he became a respected member of the Faculty of the College of Physicians and Surgeons and was later promoted to Professor of Clinical Surgery.

Dr. Benvenisty is also a respected member of several surgical societies, including one of few Vascular Surgeons in the American Society of Transplant Surgeons. He is affiliated with The Mount Sinai Hospital, Mount Sinai St. Luke’s, and Mount Sinai West in New York. Dr. Benvenisty currently leads the non-invasive vascular laboratory at St. Luke’s Roosevelt, where he also sits as Director of Surgical Clerkship for Columbia University.

If you would like to get more information about the vascular treatments offered by Dr. Benvenisty, please call his New York office at (212) 523-4706 or visit their website at http://www.drbenvenisty.com