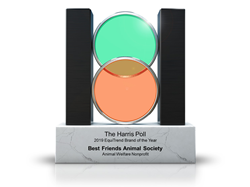 For the first time on record, the total number of dogs and cats killed in America’s shelters for a given year has dropped below the one million mark...to be named the animal welfare nonprofit most trusted/loved brand, based on the 2019 Harris Poll EquiTrend Study is especially meaningful this year.

Best Friends Animal Society has been named a Brand of the Year in the 2019 Harris Poll EquiTrend® study. Measuring brands’ health over time, the EquiTrend Brand Equity Index is comprised of three factors -- Familiarity, Quality and Purchase Consideration -- that result in a brand equity rating for each brand. Brands ranking highest in equity receive the Harris Poll EquiTrend “Brand of the Year” award for their respective categories. (For non-profits the Purchase Consideration correlates to likely donation.)

“This is an extraordinary time in the animal welfare movement. For the first time on record, the total number of dogs and cats killed in America’s shelters for a given year has dropped below the one million mark — to about 800,000 for the 2017 calendar year and the national save rate rose from 70 percent to 77 percent. To once again be honored, to be named the animal welfare nonprofit most trusted/loved brand, based on the 2019 Harris Poll EquiTrend Study is especially meaningful this year,” said Greta Palmer, Chief Brand & Communications Officer, Best Friends Animal Society.

The goal is to save the nearly 2,200 dogs and cats who are killed in shelters every day just because they don’t have safe places to call home.

The initiative is founded on the principle that collaboration within animal welfare, and on the community level, is essential to achieving no-kill across the country. It challenges communities across the country to pursue policies and strategies that increase the number of animals adopted from shelters and decrease the number of animals entering shelters.

In Los Angeles, Best Friends is leading No-Kill Los Angeles (NKLA), a citywide initiative aimed at transforming the nation’s second largest and most diverse city into a no-kill community. In Utah, Best Friends has created a statewide coalition of animal rescue and shelter partners who, together, have already made Utah a no-kill state for dogs and are on the verge of doing the same for cats. In New York, Best Friends has established critical partnerships with local animal shelters and rescue organizations to help them pave the way for a no-kill community in New York City. In Atlanta, Best Friends has joined with dedicated local partners to help the metropolitan area reach and sustain no-kill. In Houston Best Friends is working collaboratively with city shelters, local animal welfare organizations and passionate individuals to save the lives of pets in shelters. In addition to regional programs in Los Angeles, Atlanta, New York, Houston and Utah, Best Friends maintains lifesaving partnerships with thousands of animal rescue organizations and animal shelters throughout the country — all of them working to help homeless pets and create no-kill communities where they live.

Network partners receive opportunities to participate in fundraising and adoption events, marketing help, expert resources and more from Best Friends to help reduce the number of animals killed in their local shelters. Best Friends has more than 2,600 network partners in all 50 states.

The complete list of Harris Poll EquiTrend Brands of the Year can be found at https://theharrispoll.com/category/theharrispoll/.

Harris Poll EquiTrend® methodology
Best Friends Animal Society received the highest numerical Equity Score and the highest numerical score relating to Trust/Love among Animal Welfare Nonprofit brands included in the 2019 Harris Poll EquiTrend® Study, which is based on opinions of 45,541 U.S. consumers ages 15 and over surveyed online between January to January 30, 2019. Your opinion may differ. "Highest Ranked" was determined by a pure ranking of a sample of Animal Welfare Nonprofit brands.

Best Friends Animal Society is a leading national animal welfare organization dedicated to ending the killing of dogs and cats in America's shelters. In addition to running lifesaving programs in partnership with more than 2,600 animal welfare groups across the country, Best Friends has regional centers in New York City, Los Angeles, Atlanta and Salt Lake City, and operates the nation's largest no-kill sanctuary for companion animals. Founded in 1984, Best Friends is a pioneer in the no-kill movement and has helped reduce the number of animals killed in shelters nationwide from an estimated 17 million per year to about 800,000. That means there are still nearly 2,200 dogs and cats killed every day in shelters, just because they don’t have safe places to call home. We are determined to bring the country to no-kill by the year 2025. Working collaboratively with shelters, rescue groups, other organizations and you, we will end the killing and Save Them All. For more information, visit bestfriends.org.