Amazon bestseller “40 Thieves on Saipan” is humbly honored to be selected as the Winner of the 2020 Best Book Awards in the History: Military Category and recognized as a “Finalist” in the History: United States Category. This WWII history book is available on Amazon, Barnes and Noble, Books-A-Million and in many bookstores via Hardcover, ebook (Kindle and Nook) and Audiobook versions. 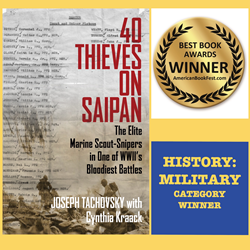 Reviewers have described "40 Thieves on Saipan" as “A Must-Read for Military History Enthusiasts,” "A realistic portrayal of war that neither sugar coats nor glorifies,” “A Gripping Story of Courage and Compassion,” and “An Outstanding Read about Little-known WWII Heroes.”

Midwest Authors Joseph Tachovsky and Cynthia Kraack are proud to announce that their World War II history book, “40 Thieves on Saipan – The Elite Scout-Snipers in One of WWII’s Bloodiest Battles” (Regnery History), is the Winner of the 2020 Best Book Awards in the History: Military Category and recognized and a “Finalist” in the History: United States Category. Just-in-time for the holidays, this “True War Classic” can be a great gift that also supports veteran charities.

With 212+ reviews on Amazon and an overall 4.7 rating, “40 Thieves on Saipan” has connected to readers of all ages with a “Flags of Our Fathers” type story about Joseph Tachovksy’s father, Lt. Frank Tachovksy, and his “40 Thieves” Platoon in the Pacific.

Reviewers have described “40 Thieves on Saipan” as “A Must-Read for Military History Enthusiasts,” "A realistic portrayal of war that neither sugar coats nor glorifies,” “A Gripping Story of Courage and Compassion,” “An Outstanding Read about Little-known WWII Heroes,” “A WW-II story, put together from the memories of the men who lived it” and “Reads like a movie, but these real men were true heroes.”

American Book Fest President and CEO Jeffrey Keen said this year’s Best Book Awards contest yielded over 2,000 entries from mainstream and independent publishers. Over 400 Winners and Finalists were announced in over 90 categories for titles published in 2018-2020. Winners and Finalists included books from across the publishing landscape, including entries from major publishers: HarperCollins, Penguin/Random House, John Wiley and Sons, Hay House, Oxford University Press, and hundreds of Independent Houses contribute to this year’s outstanding competition.

Author and Son Joseph Tachovsky was inspired to write this book after hearing a eulogy about his father, Lt Frank Tachovksy, in 2011 when he passed away at age 96. After opening his dad’s “off limits” footlocker in the family garage that was filled with personal letters, medals, photographs and the platoon roster, Joseph felt compelled to research and write the untold story that most men never spoke about while alive. For the past nine years, Joseph met with the four surviving members of the “40 Thieves” and family members of his father’s Special Operations Platoon to gather their untold stories.

With over 600+ pages of Oral Histories, Joseph worked with Award-Winning Author Cynthia Kraack to turn it into a 300-page bestselling, creative non-fiction narrative.

Readers are taken on a journey with this Elite Marine Corps’ Special Operations platoon in the Pacific Theater that were part of the “Greatest Generation”. “40 Thieves on Saipan” is a treasure trove of stories about the platoon’s early days during training in Hawaii to winning the Battle of Saipan (June 15 – July 9, 1944).

To give back, the authors are donating a significant portion of the proceeds to veteran charities. Joseph explains, “My co-author, Cindy and I, determined that when we would be fortunate enough to have this book published that we would honor my father’s sentiment that we don’t do enough for our veterans and give back to them. After collecting all of these stories from gentlemen in my father’s platoon, we believe this money deserves to go back to help veterans.”

“40 Thieves on Saipan” is available online via Amazon, Barnes and Noble, Books-A-Million, and Target, and in many book stores in hardback, ebook (Kindle and Nook) and audiobook formats.

JOSEPH TACHOVSKY (Sturgeon Bay, Wisconsin and Minneapolis, Minnesota) is an Award-Winning Author and son of WWII Lieutenant Frank Tachovsky (“Ski”), whose new book “40 Thieves on Saipan: The Elite Marine Scout-Snipers in One of WWII’s Bloodiest Battles” (June 2020) documents many stories, photographs, letters and memories of the 40 brave men in his father’s platoon. Known as the “40 Thieves” for their covert Special Operations and prowess in acquisitions made through “Marine methods”, these American war heroes took great risks and contributed to V-J Day (Victory over Japan Day). As a graduate of the University of Minnesota, Joseph is a successful Minneapolis-based restaurant consultant. Members of the “40 Thieves” and this book have been featured on the TODAY Show, WBAY ABC Green Bay, KTMF ABC/FOX Missoula Montana,, WBAY ABC Green Bay, KHON2 FOX/CW Honolulu, KITV ABC Honolulu, National Defense Radio Show, and in Stars and Stripes, Task and Purpose, The Washington Examiner, FoxNews.com, AP, Missoulian, Montana Standard, and more. https://www.40thievessaipan.com

CYNTHIA KRAACK (Minneapolis, Minnesota and Fish Creek, Wisconsin) is an Award-Winning fiction writer, who partnered with Co-Author Joseph Tachovsky to write the story of his father’s heroic WWII War platoon in “40 Thieves on Saipan: The Elite Marine Scout-Snipers in One of WWII’s Bloodiest Battles”. Kraack holds a B.A. in Journalism and History from Marquette University, a Master’s degree from the University of Minnesota and an M.F.A. from the University of Southern Maine. https://cynthiakraack.com/

“40 Thieves on Saipan” is the Winner of the 2020 Best Book Awards in the History: Military Category

Award-Winning Book: “40 Thieves on Saipan – The Elite Scout-Snipers in One of WWII’s Bloodiest Battles” (Regnery History)

Award-Winning Author Cynthia Kraack wrote "40 Thieves on Saipan" with Joseph Tachovsky as a creative non-fiction book that is based on 600 pages of Oral Histories gathered by Joseph Tachovsky.

Lt Frank Tachovsky receives the Bronze Star during World War II in Saipan, Japan. His untold story is documented by his son, Joseph Tachovsky, in the Award-Winning Book, "40 Thieves on Saipan."