Bethany L. Correia’s newly released “Grace Over Fear” is a brilliant tale about escaping from the chains of fear and terror

“Grace Over Fear” from Christian Faith Publishing author Bethany L. Correia unveils a gripping narrative that follows young Grace finding herself caught up in an evil plot of a man wherein she tries her all to get away from the fear that’s consuming her. 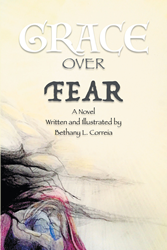 “Grace Over Fear”: a thrilling novel about a girl desperate to find freedom from the fear that’s been chasing and taunting her. “Grace Over Fear” is the creation of published author Bethany L. Correia, a Christian, a wife, and a mother to a perfectly blended family of ten children. She’s currently a homemaker and homeschools her two youngest children in Central Texas.

Correia shares, “Have you ever found yourself overcome and shaken by fear or anxiety for whatever reason? Maybe it was induced by a trauma of some sort, or maybe it’s just a natural disposition.

“In this novel that is based on a true story, twelve-year-old Grace finds herself in the middle of a wicked plot of a man. How did she get involved? Surely it wasn’t her fault. How is Grace to escape the evil plot of this man?

“Deeper still, there is a demonic plot waging war against Grace’s soul. A plan that uses Fear as its weapon to torment Grace day and night. Fear that is used to block her from finding Truth.

“Grace tries everything she can in her own strength to rid herself from Fear. She is exhausted and wearied.

“Nothing she tries in her own power has worked. Fear was over Grace. He controls her from within. How will Grace overcome Fear? Will she ever be freed?”

Published by Christian Faith Publishing, Bethany L. Correia’s new book is an amazing and riveting read in Grace’s journey as she searches for an escape route that will free her fear-chained soul. Here, readers will witness whether Grace will eventually find triumph or rather, failure, in the end.

View a synopsis of “Grace Over Fear” on YouTube.

Consumers can purchase “Grace Over Fear” at traditional brick & mortar bookstores, or online at Amazon.com, Apple iTunes store, or Barnes and Noble.

For additional information or inquiries about “Grace Over Fear,” contact the Christian Faith Publishing media department at 866-554-0919.