Betty Raymond Gubler’s newly released “Let Them Eat Grass: A Saga of the Sioux” is a moving historical fiction that explores the tragedies faced by the Sioux

“Let Them Eat Grass: A Saga of the Sioux” from Christian Faith Publishing author Betty Raymond Gubler is a thoughtful look into the possible experiences of those within the Sioux tribe during conflict with white settlers. 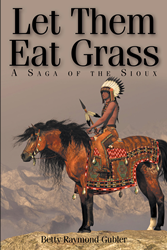 Gubler shares, “Let Them Eat Grass is a historical fiction concerning the tragedy of the Sioux Indians trying to save their land as well as the lives of their people. In 1858, Tianci, a Hunkpapa Sioux, participated in the annual dance-in-the-sun ceremony. In the vision he had, he saw a white buffalo that beckoned Tianci to follow him to the East where many White people had settled. Tianci travels to Chief Little Crow’s village in Minnesota where the situation between the Whites and the Indians is very fragile. Little Crow and his tribal members teach Tianci to speak the English language. Tianci marries Tacincadan, and they have a daughter, Kimama. Tianci is hired by Colonels Sibley and Barrett to be a guide. Visiting the Indian Agency, Tianci notices the corruption of the White agents selling the Indians’ food to other Whites. He warns the colonels about the situation that could lead to warfare. When Little Crow visits the Indian Agency and asks for the food promised to the Indians because of the land the Whites had claimed, Little Crow is told that there is no food for the Indians. When Little Crow asks what he should feed his people, Andrew Myrick mocks him, saying, “Let them eat grass or dung for all I care.” Warfare ensues. When soldiers under Colonel Barrett’s command accidentally kill Tacincadan and Kimama, Tianci desires to take revenge on Colonel Barrett. He captures Colonel Barrett’s two daughters as well as two soldiers. He releases the two soldiers and the older sister but keeps Charissa, claiming she will become his wife. Then he takes Charissa to Little Crow’s village. Much more unexpected drama follows. Let Them Eat Grass is based on historical research though some of the characters are fictional. Read this book to find out what happens to the main characters and to better understand the plight of not only the Sioux but most Native Americans in the treatment they received from the Whites.”

Published by Christian Faith Publishing, Betty Raymond Gubler’s new book offers a candid look at the extreme hardships faced by many Native tribes in the not-so-distant past.

Gubler’s love of historical research and respect for Native culture is apparent within the pages of this articulate fiction.

Consumers can purchase “Let Them Eat Grass: A Saga of the Sioux” at traditional brick & mortar bookstores, or online at Amazon.com, Apple iTunes store, or Barnes and Noble.

For additional information or inquiries about “Let Them Eat Grass: A Saga of the Sioux,” contact the Christian Faith Publishing media department at 866-554-0919.