Following their Top 40 Hit My Kind of Crazy & their current single, Shooting Star, climbing the NMW charts in the US, the band asks fans to vote for their 3rd single with this sneak peak demo sampler. 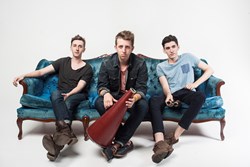 Beyond the Sun promises the next single will deliver the same memorable sing-along pop rock sound that fans have come to love.

Beyond the Sun released a demo sampler of 7 songs for their fans today on YouTube. The band recently announced they are heading down to Charleston, SC later this month to record their next radio single. Beyond the Sun's 3rd single will be produced by Eric Bass of Shinedown at Ocean Industries Recording Studios. The band is asking fans to listen to the YouTube sampler and cast votes for their favorites through the band's YouTube, Twitter, Facebook or Instagram social media sites.

Following the success of their Top 40 hit My Kind of Crazy, which remained in the Top 40 on the U.S. R&R Indicator charts for seven weeks, the Top 10 on the Top 40 New Music Weekly Chart for eight weeks, peaking at #5, a Top 100 record on Mediabase including #11 on Sirius XM's Top 20 on 20 and their second single Shooting Star (Radio Edit) currently #13 on the Top 40 NMW charts in the US, the guys want to give their fans a chance to help choose the 3rd radio single.

The fresh, energetic and heartfelt music of Beyond The Sun celebrates the Canadian band’s belief that lyrics and melodies can tell an on-going, universal story and help human beings connect powerfully through their many diverse experiences. Through catchy yet personal tunes that sparkle with infinite layers of harmony, guitarist Phil, lead vocalist Colin and drummer Dalton unleash tunes that resonate personally with their audiences. Beyond The Sun has garnered the attention of audiences throughout Canada, United States and Puerto Rico.

Beyond the Sun promises the next single will deliver the same memorable sing-along pop rock sound that fans have come to love. With the studio visit just around the corner the band hopes fans will cast their votes to help them make this decision. My Kind of Crazy EP and Shooting Star (Radio Edit) are available for download at iTunes, Amazon MP3, Google Play & Spotify. For more information about Beyond The Sun, the band’s music, videos, upcoming tour details, to join the mailing list and connect via Facebook, or Twitter, visit http://www.beyondthesunmusic.com.

My Kind of Crazy Cover