Renowned chef and restaurateur, David Burke details how the global pandemic has affected his restaurants. 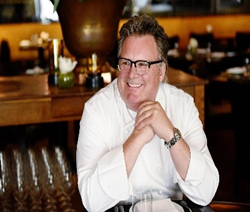 The challenge is not knowing when we’re going to get going and when to ramp up and not sit back.

The typical workday has become a lot different for successful chef and restaurateur, David Burke. Known as one of the leading pioneers of American cooking, a television celebrity, philanthropist, cookbook author, and current owner and/or operator of several restaurants throughout the tri-state area, the chef has been forced to put down his kitchen utensils indefinitely. The restaurateur sat down with Richard Santore, Vice President of Bielat Santore & Company to detail how the global pandemic has affected his businesses in the second virtual interview of Bielat & Santore’s “Thursday Restaurant Rap” series.

With seven restaurants in New York and one in Washington, D.C. all closed to customers, Burke has managed to keep limited business flowing from three of his four New Jersey restaurants offering curbside pickup, food delivery and some grocery delivery. But with 500 employees on the books and little income coming in, almost 95 percent were laid off nearly a month ago when the mandatory closures began. “It’s starting to get a bit frustrating,” said Burke when asked if he has been getting assistance from relief efforts. “It’s difficult to get through to the banks. We’ve got to be able to get through communicating. There’s got to be some cash flow.”

As most of his businesses are in New York, which is known for their exceedingly high rents, Burke is hoping for relaxed rents from landlords until business can resume. “The landlords I’m dealing with have been receptive to negotiations. We have to work together to find what would be the best solution,” said Burke. “In general, the leases have to be adjusted and they have to be changed. New York is a very difficult place for small businesses right now.”

Despite the economic setbacks, Burke remains confident that the restaurant industry will persevere no matter how long it takes to open the doors again. “We’ve got to remind ourselves; this virus was not caused from restaurants. It wasn’t caused from unsanitary food, it wasn’t caused from unsanitary workers,” said Burke. “It’s not a foodborne illness. Once we start to re-engage with each other, restaurants will one day be back in full swing as they were.” In the meantime, the chef is focusing on his employees, holding off-premise meetings to continue the communication, and making sure they all get unemployment. “The challenge is not knowing when we’re going to get going and when to ramp up and not sit back,” said Burke. “We’re doing some spring training on the sidelines getting ready to reopen.”

Part of that spring training is launching Feed the Heroes, a fundraising campaign organized to send meals to first responders, healthcare workers and restaurant workers that are in need. For information on how to contribute, visit https://www.chefdavidburke.com/feedtheheroes. For more information about Chef David Burke: https://www.chefdavidburke.com/