Bill Brokaw’s newly released “Alzheimer’s, Life’s Darkest Disease” is a captivating journey of a couple battling the trials of Alzheimer’s together

“Alzheimer’s, Life’s Darkest Disease” from Christian Faith Publishing author Bill Brokaw is a heartrending tale of a powerful love in the events of illness, complication, and never-ending struggles. 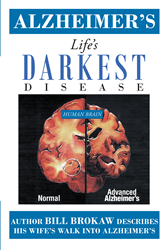 Brokaw shares, “This is a true story written by Bill Brokaw of his seventy-nine-year-old wife, Pat, as she suffers from brain damage. Brain damage that causes her to lose her memory and her ability to knit, sew, crochet, write, and all hand-coordinated activities in which she excelled before dementia.

“The story takes place over a period of four years and exists because Bill took the time to make a journal of her walk into the clutches of this terrible disease. Early on, doctors called it dementia, but over a year ago, the diagnostic call was Alzheimer’s.

“When Bill first realized that Pat was losing her memory, he contacted a friend, whose husband had lost his life to Alzheimer’s. The friend advised Bill to not only see a doctor who specializes in brain diseases, but to also contact to Alzheimer’s Association for help. It was only through the help of the doctor and Alzheimer’s that Bill was able to handle the very difficult job of a caregiver.

“Caregiving over the four years, for eighty-year-old Bill, went from a small amount of care to total care. Total care was just too difficult and caused Bill many sleepless nights.

“Finally, with the financial help from both Medicaid and the Veteran’s Administration, Pat and Bill get the help they need to reside in the Alaska Veterans and Pioneers Home located in Palmer, Alaska. Also the Alzheimer’s Association should be credited with providing the classes that enabled Bill to become a patient and understanding caregiver.”

Published by Christian Faith Publishing, Bill Brokaw’s new book is a touching read about the experiences of the author as he witnesses his wife’s suffering from this terrible disease. He hopes that their story will help others who are also in a similar situation.

View a synopsis of “Alzheimer’s, Life’s Darkest Disease” on YouTube.