Bill Tortorella’s newly released “The Ninth Level of Enlightenment: The Wisdom of the Light” is a compelling personal memoir

“The Ninth Level of Enlightenment: The Wisdom of the Light” from Christian Faith Publishing author Bill Tortorella is a powerful look into the author’s near-death experience that led to a rejuvenated sense of connection with God. 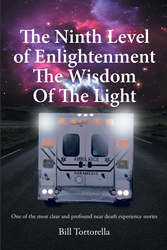 Tortorella shares, “This book is about one man’s experience of traveling beyond this world into the light of God.

“During Bill’s near-death experience in 1994, the light he was in and the love within it revealed to him the answers of all humanity from three guardian angels in heaven. These beautiful angels emitted so much love and knowledge. The gifts that were given to him were the nine principles of enlightenment. These principles, if implemented, can change our world forever.

“This is a poignant true story with a powerful message. A top Hollywood writer and producer said the ninth level of enlightenment makes for a wonderful Christian faith/spiritual screenplay or nonfiction book.

“In the vein of Heaven Is for Real or the Five People You Meet in Heaven—Bill’s story begins when he leaves New York City and moves to Miami, Florida, as a young man not being able to find work in his field. This was in response to an ad in the Miami Herald to become a paramedic for Miami-Dade County. Bill took the job for county rescue and went to Mount Sinai medical school. Right before that happened, a chance encounter happened with a man by the name of Nigel Nottage—he was the lawyer for Mr. Howard Hughes. Nigel lived and worked in Nassau, Bahamas. In that meeting, Nigel chartered a course for Bill’s life. It was not a recommendation. He told Bill something that would change his direction in life and take him on business travels to many parts of the world with adventure and intrigue!

“Was it coincidence or prophecy that led Bill to the evening of his near-death experience in Tucson, Arizona, in 1994? It became a night of light and love, a journey to heaven.”

Published by Christian Faith Publishing, Bill Tortorella’s new book will captivate readers as they reflect on the author’s poignant experience.

Tortorella shares in hopes of spreading the knowledge gained on a fateful night in Arizona nearly thirty years ago.

Consumers can purchase “The Ninth Level of Enlightenment: The Wisdom of the Light” at traditional brick & mortar bookstores, or online at Amazon.com, Apple iTunes store, or Barnes and Noble.

For additional information or inquiries about “The Ninth Level of Enlightenment: The Wisdom of the Light,” contact the Christian Faith Publishing media department at 866-554-0919.