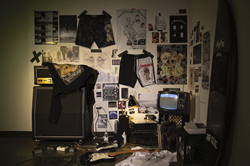 “It’s been an amazing five months with five show-stopping collections. But this one feels like the final song in a mind-melting Metallica concert." Evan Slater, VP of Global Marketing at Billabong

Hitting retailers and online channels globally today, the fifth drop in the Billabong x Metallica collection is endorsed by Billabong surf athlete and new World Championship Tour member Ethan Ewing. The 21-year-old Australian is known for his speed, flawless technique and explosiveness, which is a perfect match for the impossibly fast, technically brilliant energy of Metallica’s multi-platinum ‘...And Justice for All’ album.

This premium design collaboration with Metallica comes through Billabong LAB, a platform that supports artists, musicians, designers and photographers. The five-part collection, released between October 2019 and March 2020, features a unique blend of board sports-engineered apparel from Billabong and album artwork from Rock & Roll Hall of Fame inductees Metallica.

Available today, the final product drop takes inspiration from Metallica’s fourth studio release, ‘...And Justice for All’, with the raucous opening track, “Blackened”, as the collection’s theme song. Recorded in early 1988 at One on One Recording Studios in Los Angeles, ‘…Justice’ sounded unlike anything ever before: It was loud, fast and heavy, yet it was sonically unique; and the authority-defying sound further acknowledged Metallica as progenitors of the genre.

As a special treat, the ‘...And Justice for All’ drop includes artwork never featured on apparel before! Renowned artist Pushead provided his original concept art from the “One” single -as well as the artwork for “The Shortest Straw”- for the collection. Pushead has helped define the graphic style of board sports AND of punk and metal culture like no other artist before or after him, with his signature depictions of skulls and gore that were featured on skateboard graphics and the legendary ‘Skate Rock’ cassette tapes released by Thrasher Magazine.

With Metallica’s Kirk Hammett and Robert Trujillo being avid surfers, the raw energy of ‘...And Justice for All’ finds its natural counterparts in Billabong’s engineered garments that are built to endure the harshest ocean conditions.

“It’s been an amazing five months with five show-stopping collections,” said Evan Slater, VP of Global Marketing at Billabong. “But this one feels like the final song in a mind-melting Metallica concert. We’re so grateful to have worked with such a legendary brand on a project of this scope and hope you enjoy the product as much as we do.”

Key pieces in this final drop include the ‘The Shortest Straw’ boardshort featuring floating eyeball and skull imagery in the characteristic Pushead line art style. The drop’s second boardshort, ‘Landmine’, showcases the artist’s concept art for the single “One” in a colorized sublimation print. Crafted from 90 percent recycled polyester and 10 percent elastane in a 19-inch performance fit, both surf trunks represent Billabong’s leadership in athlete approved performance apparel.

Pushead’s original design also shines on the ‘One Tee’, featuring the hardcore artwork on super soft, 100-percent ring spun cotton in a garment wash. As the exclamation point behind the fifth apparel drop, the all black 100-percent cotton corduroy jacket features the ‘The Shortest Straw’ design as a large back print,
supplemented by applique and embroidery details in a vintage wash.

You can now see all special products from all five drops of the co-branded collection on the Billabong LAB x Metallica Collection landing page. A video featuring members of Metallica and the Billabong surfing team sharing their take on the new collection can be viewed here.

“There’s a lot of rage in metal, but it’s a good rage,” said Metallica bassist and avid surfer Robert Trujillo about the collaboration with Billabong LAB. “It’s a great release, almost like surfing, out in the rhythm of the ocean.”

The fifth and final delivery in the Billabong x Metallica 2019-2020 Collection is available now in e-commerce and international retail while supplies last.

For more information on Billabong, Billabong LAB, Metallica and the upcoming collection, please visit http://www.billabong.com or Instagram at @Billabong.

ABOUT BILLABONG:
Billabong is a boardshort and bikini brand committed to the leading edge of surf culture. Founded in 1973 in Australia by visionary surfboard shaper and designer Gordon Merchant, Billabong is laser-focused on sharing the magic feeling of waveriding with the world.

That feeling comes to life in many forms, from award-winning boardshorts and swimwear to an eclectic bunch of culture-defining ambassadors to a legacy of game-changing experiences from the ocean to the mountains and beyond. Merchant originally envisioned a world where surfers and the surf-inspired feel special — like they’re the luckiest people on the planet. Now distributed in more than 100 countries across the globe, Billabong remains dedicated to his original vision — and making that feeling even more special tomorrow.

ABOUT METALLICA:
Formed in 1981 by drummer Lars Ulrich and guitarist/vocalist James Hetfield, Metallica has become one of the most influential and commercially successful rock bands in history, having sold nearly 120 million albums worldwide and generating nearly 9 billion streams while playing to millions of fans on literally all seven continents. The band's several multi-platinum albums include Kill ‘em All, Ride The Lightning, Master of Puppets, …And Justice for All, Metallica (commonly referred to as The Black Album), Load, Reload, St. Anger, Death Magnetic, and most recently Hardwired...to Self-Destruct, which was released in November 2016 and charted at #1 in 32 countries.

Metallica's numerous awards and accolades include nine Grammy Awards, two American Music Awards, and multiple MTV Video Music Awards, and induction into the Rock & Roll Hall of Fame in 2009. In June of 2018, the band was awarded one of the most prestigious musical honors in the world: Sweden’s Polar Music Prize. Metallica is currently in the midst of its WorldWired tour, which began in 2016 and will wrap up in late 2020 or early 2021.