Birch Gold Group Named Sole Authorized Dealer of Australia’s Gold and Silver Florins, First Coins of Their Kind in Half a Century 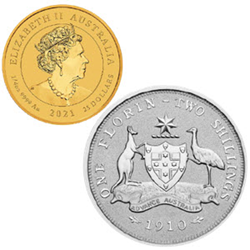 We are absolutely thrilled Perth Mint made Birch Gold Group the only source for their gold and silver florin coins. It’s rare for a piece of history to be introduced in such a magnificent way!

Leading precious metals dealer Birch Gold Group announced today that it will be the only authorized distributor for Perth Mint’s modern versions of a mainstay of British monetary history. Two new 2021 coins, a 1/4 oz. Australian Gold Florin and a 2 oz. Australian Silver Florin, are available for sale. These new coins are the first florins minted in Australia since 1963.

As a result of the new agreement with Perth Mint, Birch Gold Group is the only official seller of both these gold and silver florin coins.

"We are absolutely thrilled Perth Mint made Birch Gold Group the only source for their gold and silver florin coins. It’s rare for a piece of history to be introduced in such a magnificent way! We expect it to quickly become one of Birch Gold's best sellers," said Peter Reagan, financial market strategist with Birch Gold Group.

Australia's national mints haven't created any new florins since the transition to a decimalized currency in 1963. The florin was one of over a dozen coins in the traditional and strange English monetary system (which included farthings, half-crowns and shillings). After moving from the antique 240-pennies-per-pound-sterling denominations to a more rational 100-pennies-per-pound-sterling, the obsolete coins, from groats to guineas, were abandoned.

This was rather a shame. The florin had its roots in Medieval times. The first English florin dates to 1344, when Edward III had a 0.23 oz. gold six-shilling coin struck to capitalize on the popularity of the Florentine gold coin called the florin. So after 600 years of settling debts across the British empire, from Calgary to Calcutta, the move to a decimal-based currency extinguished a piece of monetary history.

The design of both the gold and silver florins pays homage to Australia’s English roots and its current role in the Commonwealth of Nations.

The obverse of both florins features Her Majesty Queen Elizabeth II, wearing the King George IV diadem and Diamond Jubilee earrings. This is Jody Clark’s instantly-recognizable “fifth portrait” of the Queen, called “the new definitive Britannia.” Weight, purity, denomination and year of minting appear on the obverse. The silver florin includes an inset portrait of King Edward VIII, known as the “soldier prince” in Australia for his valour in the trenches of World War 1.

Both florins’ reverse showcases the first Australian Commonwealth coat of arms circa 1908-1912, replacing traditional heraldic beasts with Australian icons. A kangaroo and emu support a shield bearing the Cross of St. George with five six-pointed stars (one for each state). Above the shield is the seven-point star of Federation, and below a banner with the motto, “Advance Australia.” The reverse is marked “1910,” in honor of the first year Australia minted florins.

Featuring a reverse proof finish, these exquisite pieces of cultural history are also approved for placement in a precious metals IRA, and will make a great addition to any personal holdings of gold and silver.

For more information on the Australian gold or silver florin coins, and Birch Gold Group’s products and services, visit https://www.birchgold.com or call (800) 355-2116.

About Birch Gold Group
Founded in 2003 and headquartered in Burbank, California, Birch Gold Group is a leading dealer of precious metals serving a diverse customer base across the United States. Employing a team of experienced professionals and precious metal experts, the company provides a wide range of metals for physical possession and placement within an IRA, including silver, gold, platinum and palladium.

With a strong commitment to helping its customers discover how investing in precious metals can offer enhanced protection in the face of economic instability, Birch Gold Group is known throughout the industry for its exemplary reputation and track record, consistently maintaining top scores and ratings with the Better Business Bureau, the Business Consumer Alliance and multiple renowned review websites.