The new trading service Vaultoro.com, offers its users the ability to be 100% bank independent thanks to the combination of trading bitcoin and gold. The gold is stored in high security vaults within Switzerland and all bitcoin holdings are publicly visible and verifiable. 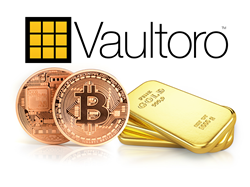 For the first time ever, gold can be traded with bitcoin in realtime all around the world

Today with the launch of Vaultoro.com a person in Australia can potentially pay for a friend’s beer in New York instantly using gold. Vaultoro is combining the oldest currency - gold - with bitcoin, the newest currency in the world. For the first time people around the world will be able to trade bitcoin and gold 100% bank independently. Users' gold is insured and vaulted in professional Swiss vaults while its value flies around the world in realtime.

When Satoshi Nakamoto originally invented bitcoin, he/she modelled a lot of the protocol on gold. The key differences between the two are that gold has a historically stable price but is heavy and expensive to send; on the other hand, bitcoin has a very volatile price but is fast and cheap to send worldwide. By allowing people to instantly convert their bitcoin to gold and back they are effectively backing their bitcoin with gold, removing the price volatility, but also enabling people to send their gold instantly around the world.

Many people in the bitcoin community got into the crypto currency with an aim to exit the main stream financial system, but to deal with the massive volatility of the currency a lot of those same people have to trade back and forth into euro or dollars. Gold protects people against the price volatility of bitcoin without them ever having to go back into fiat currencies, which is attractive to a large number of the bitcoin community.

The other issue Vaultoro set out to solve was dishonest exchanges.

Joshua Scigala, cofounder of Vaultoro.com, was financially hit by the collapse of the bitcoin exchange MtGox at the end of 2012, and this was the inspiration to create a fully auditable bitcoin exchange.

“The technology of bitcoin is moving far too fast for government regulators to keep up with, but the free market is demanding better answers and is starting to effectively regulate itself. If exchanges don’t produce what the market wants then they don’t get customers," says Scigala. "Transparency of our books is our number one priority, so Vaultoro takes full advantage of the public bitcoin ledger to constantly prove full reserves. The gold holdings are insured and audited every 6 months by one of the largest auditing firms in the world.”

About Vaultoro.com
Vaultoro is a bitcoin gold exchange where users can instantly convert their bitcoin to physical gold, vaulted in professional Swiss vaults. Joshua and Philip Scigala, two brothers with a long history in bitcoin and gold, founded the company in December 2014. Vaultoro’s gold supplier and vaulting company ProAurum is one of the largest physical precious metal’s traders in the European Union.