The Bitcoin IRA company’s customers saw balances grow 297% over the course of the year. 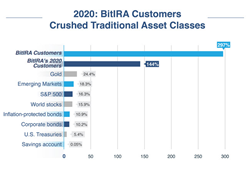 2020: A Great Year for BitIRA Customers

Simply put, our customers could not be more delighted about their account performance.

BitIRA – pioneer of the first insured cold storage solution for cryptocurrency retirement accounts – released customer performance data for 2020. On average, each dollar invested through the crypto IRA company on January 1, 2020 grew 297% over the course of the year. Furthermore, those retirement savers who might have feared they’d missed out on the 2020 boom and opened a cryptocurrency IRA during 2020 still enjoyed an average 144% return on investment.

In comparison, here are other major asset class returns over the same period:

BitIRA Customers “Could Not Be More Delighted”

“Simply put, our customers could not be more delighted about their account performance,” said Jeremy Warner, Head of Sales at BitIRA. “Prior to cryptocurrencies, nobody would ever expect that kind of return.”

Warner went on to discuss how the 2020 windfall had changed the retirement plans of many. “We read so many emails, took so many phone calls, from our customers expressing their gratitude for all our help. Now they could afford an oceanfront lot in Belize, to become a certified pilot, to stop working years earlier than they thought. A lot of dreams came true in 2020,” Warner mused.

Cryptocurrency IRA Resilience in the Face of Uncertainty

One lesson learned in 2020? Cryptocurrencies behave in unexpected ways. In March and April, Bitcoin and the S&P 500 moved in lockstep. In September and October, Bitcoin and gold had a more positive correlation than Bitcoin and stocks. Institutional investors and retirement savers are still trying to decide exactly what role cryptocurrencies play in their plans.

According to Warner, an even greater uncertainty troubled savers who reached out to BitIRA late in 2020. “Generally, people felt deeply concerned they’d already missed out,” and although the possibilities of cryptocurrency investing interested them, they were leery of buying at high prices. “Some people called twelve, fourteen times, just hesitating to make the decision,” Warner said. “I told them to look at the price tomorrow and call me back.” Those who were able to summon the courage to open a digital currency IRA with BitIRA had the pleasure of watching their savings grow before their eyes – on average, their balances more than doubled.

No one should necessarily expect a reprise of 2020’s record growth. Regardless, cryptocurrencies can play a powerful role in a diversified savings plan. And as Nobel Prize-winning economist Harry Markowitz reminds us, “Diversifying sufficiently among uncorrelated risks can reduce portfolio risk toward zero.”

Can a Crypto IRA Be Part of a Retirement Strategy?

Yes, cryptocurrencies can provide diversification to any savings plan. According to Warner, the general population still considers cryptocurrency investing a highly-speculative venture, fraught with danger.

“We developed BitIRA to counter all possible external risks,” Warner explained, and went on to explain them in great detail. Any potential hacker would be confounded by a hypersecure exchange and an absence of “hot wallets.” Customers’ funds are locked away in cold storage housed in a class-5 nuclear vault. Accessing the account requires multi-party authentication.

“Furthermore, all customer assets are insured dollar-for-dollar” by a panel of London insurance companies with S&P ratings of A or better, Warner said. “This gives our customers the confidence that the full value of their retirement savings are secure.”

What is Dollar-for-Dollar Insurance?

Asked about the significance of “dollar-for-dollar insurance,” Warner explained the concept like this:

"Imagine you’re putting your retirement savings, say $200,000, in a bank. First you make sure the bank has insurance and see yes, they have a $400,000 insurance policy. Great – that’s twice as much as you need! You make your deposit and go home happy. Later you re-read the bank’s brochure and notice a small detail: that $400,000 insurance policy covers all the bank’s deposits. Say the bank has $4 million in deposits and gets robbed – in that case, only 10% of the bank’s assets are insured. Your reimbursement would be 10% of your total investment."

The full amount of customer’s savings are insured at no additional cost, mitigating the risks of theft, hacking, loss of private keys, and other worst-case scenarios associated with cryptocurrencies. In addition to making digital currency so much safer for retirement savers, BitIRA eliminates the technological barrier to entry. The combination, so far, has been simple for IRA owners and as well-protected as money in the bank.

The BitIRA team set out to remove the technological barriers to cryptocurrency saving and help their customers meet their financial goals. As Warner reminds us, it’s never too late to diversify retirement savings with digital currency – and perhaps enjoy watching their own balances grow before their eyes, just like BitIRA’s customers did in 2020.

Based in Burbank, California, BitIRA is a leading specialist in the setup and management of cryptocurrency holdings in self-directed IRAs. Founded by team members from Birch Gold Group with extensive precious metals IRA experience, the company was established on the belief that Americans should have easier access to the wide range of conventional and alternative assets available to hold in their tax-advantaged retirement accounts. Aside from facilitating the setup and management of digital currency IRAs, BitIRA advocates for public awareness of available investment options.

For more information about BitIRA or to get started with a Bitcoin IRA, visit https://www.bitira.com.