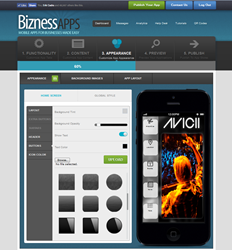 We founded Bizness Apps with the simple goal of allowing small businesses to create beautiful, functional, and engaging mobile apps for their customers at a price that made sense to them.

Bizness Apps 4.0 comes equipped with a host of features to ensure their users get the most out of the platforms new design and functionality, including:

"Bizness Apps has once again set the bar for small business apps around the world. As the leader in the space, we pride ourselves on having the best product available for our customers and with this new release, we can confidently say SMBs will see a higher return on investment with a mobile application than ever before," said Stephen Heisserer, VP of Product.