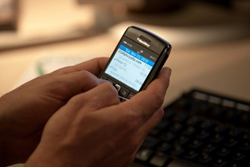 "Initial reviews from our customers such as NATO, the U.S National Guard and other U.S. Department of Defense agencies has been very encouraging. The registration and activation process only requires the entry of a simple 6 digit code to activate the Blackberry application on private networks," said Howard Ryan, CEO Desktop Alert Inc.

Desktop Alert provides mobile applications for Blackberry, Android, Kimble and iOS that can be installed on users’ mobile devices and activated with a Desktop Alert server to receive mobile alerts (via push notification), and view recently received mobile alerts, and send alerts (if the user has the appropriate permissions to execute scenarios). In order to provide this functionality, the mobile app needs to communicate with its associated Desktop Alert server.

Connections from the mobile app to the relay service are secured using HTTPS (TLS/SSL). The communication consists of simple REST-style requests that are authenticated; only authenticated requests are allowed.

We Know Who Is Logged On and Where They Are