Black Female Police Officer Speaks Out on Racism in Law Enforcement in Her New Memoir, “Walking The Thin Black Line”

Career Police Lieutenant Melissa McFadden Shares What It’s Really Like to Be Black and Wear a Badge, Based on Her 24 Years Confronting Racism in a Big City Police Department 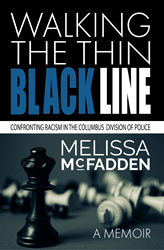 New book shares the truth about policing. Follow an officer's 24-year quest to defend her overpoliced community while coping with the personal trauma of working for a racist police department.

Black officers walk a thin Black line every time they put on their uniforms. On one side is the Black community they strive to serve and protect from unjust treatment; on the other, a racist institution where they experience ongoing discrimination themselves.

Black officers walk a thin Black line every time they put on their uniforms. On one side is the Black community they strive to serve and protect from unjust treatment; on the other, a racist institution where they experience ongoing discrimination themselves.

McFadden shares her 24-year quest to defend her overpoliced community while coping with the personal trauma of surviving in a racist police department in this new book available now on Amazon.

Growing up, McFadden dreamed of becoming a police officer – but when she landed a job with the Columbus, Ohio Division of Police, she learned that policing was something very different than what she’d envisioned. As a Black woman from the coal country of West Virginia, she found herself confronting a big city racist police culture that was born in the slave patrols of Reconstruction, emboldened through the Jim Crow era, challenged in the Civil Rights era, and still gaining momentum in the Black Lives Matter era.

McFadden’s memoir “Walking The Thin Black Line” is about her journey through the thicket of systemic racism that hides in union contracts, unfair assignment practices, and discriminatory disciplinary decisions. She shares how racism thrives within police culture because the purpose of policing has never shed its original focus—a war on Black people. McFadden never imagined the day that she would be standing in solidarity with young Black activists and their white allies, holding a sign saying, “Police Reform Now,” while shouting, “BLACK LIVES MATTER!” Her voice had been silenced for over 20 years of her career through threats of retaliation that included taking her entire pension from her.

This historic book documents a perspective not widely known by the politicians, activists, faith leaders and citizens searching for answers to the mistreatment of Black people by our police. The Black officer is often categorized as a turncoat, while at the same time lauded as the hope to solve the problem. Many minority officers remain silent. Many leave the profession. A few who have stayed are beginning to speak out and fight back. McFadden is still in it and inviting you to join her.

About Melissa McFadden
Melissa McFadden is an activist and author who’s spent 24 years as a police officer in the Columbus, Ohio Division of Police. In her years in this profession, she’s witnessed racism throughout the police culture. Silent no more, McFadden shares her journey in, “Walking The Thin Black Line.” Buy the book on Amazon, learn more at https://www.walkingthethinblackline.com/, follow @ThinBlackLine2 on Twitter, or email info@walkingthethinblackline.com.