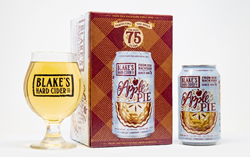 “The 75th anniversary of the farm and orchard my grandparents began just merited us to create a commemorative hard cider that would showcase our foundation and roots,” said Andrew Blake, Blake’s Hard Cider founder.

Blake’s Hard Cider, the Midwest’s largest craft cidery, announces the release of its Apple Pie Hard Cider, fittingly revealed on Thursday, May 13, National Apple Pie Day. The limited-edition craft beverage was created to pay homage to the 75th anniversary of Blake Farms in Armada, Mich. which began as the Blake’s family farm and has since developed into a favorite year-round destination for generations, along with a 1,000-acre working farm and Blake’s Hard Cider production facility and Tasting Room.

The new hard cider flavor, made with a base of fresh-pressed dessert apples combined with hints of cinnamon and vanilla, honors Blake’s apple orchard origins and is only available this year. Blake’s Hard Ciders are all made from a proprietary five apple blend of apples grown, harvested, pressed, and fermented on the farm. Always gluten-free, the hard ciders contain more than nine apples per can and have nearly one-third the sugar of national leading cider brands.

“The 75th anniversary of the farm and orchard my grandparents began just merited us to create a commemorative hard cider that would showcase our foundation and roots,” said Andrew Blake, Blake’s Hard Cider founder. “For our hard cider fans who have enjoyed our beverages for the past eight years, this milestone allows us to share our story and longevity as a family owned and operated company, one that continues to evolve and grow through the years and gave me the opportunity to develop the Blake’s Hard Cider brand for a new generation.”

Blake’s Apple Pie Hard Cider (6.5% ABV) will be sold in 12-ounce 6-pack cans and available in early June on store shelves across Blake’s Hard Cider’s 16-state footprint and can be ordered through its website. Preorder is available now at http://www.blakeshardcider.com/delivery.