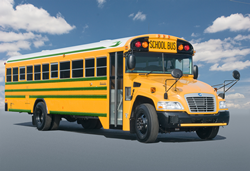 Newport News Public Schools has run propane buses for two years and will add 11 more by the end of 2019.

We continue to replace our school district’s aging diesel buses with propane. Propane not only reduces emissions, but also saves our district thousands of dollars in fuel and maintenance costs each year.

The 18 buses delivered to Newport News Public Schools may look ordinary, but a unique fuel powers them: propane. Their arrival marked a special milestone — the 15,000th propane bus delivered by Blue Bird.

Newport News Public Schools operates a fleet of 335 buses; 62 are fueled by propane, an emission-reducing, cost-effective alternative fuel. The district has run propane buses for two years and will add 11 more by the end of 2019.

“We continue to replace our school district’s aging diesel buses with propane,” said Shay Coates, transportation director of Newport News Public Schools. “Propane not only reduces emissions, but also saves our district thousands of dollars in fuel and maintenance costs each year.”

The shift away from diesel is part of a national trend. School district and school bus contractor use of propane school buses has increased 800 percent in the last seven years, according to the Propane Education & Research Council. “Currently more than 1 million students at over 900 public and private schools ride propane buses each day,” said Tucker Perkins, president and CEO of PERC, who also presented Newport News School District with the PERC Clean Energy Innovation Award.

“The Newport News school district is joining hundreds of other school systems across the country that choose clean-operating and economical propane,” said Mark Terry, chief commercial officer of Blue Bird Corporation. “They want to save money, benefit the environment and simplify maintenance. Propane’s reputation as economical, safe and environmentally friendly is growing quickly.”

“We’ve saved $800 on oil changes alone with each of our propane buses compared to our diesel buses,” said Brian Hanna, maintenance manager for Newport News Public Schools. “Propane buses cost less to fuel, as well, about 80 cents less per gallon.”

The Ford engine with a ROUSH CleanTech propane fuel system used to equip the Blue Bird Propane Vision bus is, on average, 65 percent lower emitting than the current emissions standards of EPA and CARB. “Newport News School District’s move away from diesel is helping reduce its environmental impact in the Tidewater region,” said Ryan Zic, vice president of school bus sales at ROUSH CleanTech. “The district would have to operate 100 propane autogas buses before it would produce as much NOx as only one diesel bus manufactured before 2007.”

These propane buses offer another big plus for both drivers and students: a very quiet ride. “There is a huge difference in noise level with our propane buses. Drivers have had nothing but positive experiences,” Coates said. “The only complaint we’ve had from students is that the propane buses are so quiet that they may not hear the bus coming!”

The district celebrated the milestone bus with an event at its new transportation facility. To accommodate its growing propane fleet, the district installed a second propane station that can fuel two buses at once. Its original fuel infrastructure will be used at a smaller onsite bus lot.

Like many other school districts, Newport News did its homework before purchasing propane buses, ensuring it had onsite infrastructure set up and taking advantage of training offered by Blue Bird and ROUSH CleanTech.

About Blue Bird Corporation: Blue Bird is the leading independent designer and manufacturer of school buses, with more than 550,000 buses sold since its formation in 1927 and approximately 180,000 buses in operation today. Blue Bird’s longevity and reputation in the school bus industry have made it an iconic American brand. Blue Bird distinguishes itself from its principal competitors by its singular focus on the design, engineering, manufacture and sale of school buses and related parts. As the only manufacturer of chassis and body production specifically designed for school bus applications, Blue Bird is recognized as an industry leader for school bus innovation, safety, product quality / reliability / durability, operating costs and drivability. In addition, Blue Bird is the market leader in alternative fuel applications with its propane-powered, electric and compressed natural gas-powered school buses. Blue Bird manufactures school buses at two facilities in Fort Valley, Georgia. Its Micro Bird joint venture operates a manufacturing facility in Drummondville, Quebec, Canada. Service and after-market parts are distributed from Blue Bird’s parts distribution center located in Delaware, Ohio. For more information on Blue Bird’s complete line of buses, visit http://www.blue-bird.com.

Blue Bird ) is the leading independent designer and manufacturer of school buses, with more than 550,000 buses sold since its formation in 1927 and approximately 180,000 buses in operation today.

ROUSH CleanTech, an industry leader of alternative fuel vehicle technology, is a division of Roush Enterprises based in Livonia, Michigan.