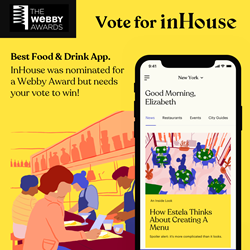 We are very proud of our work on the InHouse app as it truly showcases Blue Label’s strengths not just as a leading creative design agency, but also as a world class engineering organization.

Blue Label Labs is a leading digital product agency based in New York City and is regarded globally as one of the top design and development teams in the world. Blue Label Labs partnered with InHouse, a private membership based bookings platform that brings together restaurants and regulars to celebrate dining culture, to launch the InHouse app in London and New York in March of 2020 to critical acclaim. The InHouse app combines an elegant visual experience and richly detailed content with an AI-powered assistant named Pepper that seamlessly guides its members to find and make reservations at some of the most exclusive restaurants in New York and London. InHouse’s Pepper chatbot has been lauded for its power and ease of use resulting in the InHouse app also being named an Webby Honoree in Apps, Mobile, and Voice: Machine Learning and Bot category.

“Nominees like Blue Label Labs are setting the standard for innovation and creativity on the Internet,” said Claire Graves, Executive Director of The Webby Awards. “It is an incredible achievement to be selected among the best from the 13,000 entries we received this year.”

“We are very proud of our work on the InHouse app as it truly showcases Blue Label’s strengths not just as a leading creative design agency, but also as a world class engineering organization,” said Danny Deserto, Creative Director of Blue Label Labs. “Working alongside the fantastic founders of InHouse, we were able to infuse the brand message throughout the app and pair it with a powerful recommendation engine and an AI-powered chatbot.”

As a nominee, Blue Label Labs is also eligible to win a Webby People’s Voice Award, which is voted online by fans across the globe. From now until May 8th, Blue Label Labs fans can cast their votes at vote.webbyawards.com.

Winners will be announced on Tuesday, May 19, 2020, and honored in an Internet Celebration on Tuesday, May 19, 2020. Winners will have an opportunity to deliver one of The Webby Awards’ famous 5-Word Speeches. Past 5-Word Speeches include: Steve Wilhite’s “It’s Pronounced 'Jif not ‘Gif';" NASA’s “Houston We Have A Webby;” and Solange’s “I Got Five On It.”