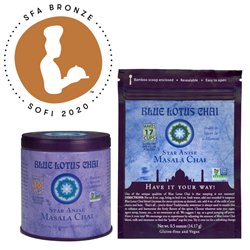 For the second consecutive year, Blue Lotus Chai has received the Specialty Food Association's 2020 sofi™ Award for innovation and taste in the 48th annual awards -- dubbed by Bloomberg as "the Oscars of Artisanal Foods." Amongst many entries, their delicious and unique "Star Anise Masala Chai" received the bronze within the tea category. Blue Lotus Chai will be attending the virtual Fancy Food show in September, where the Star Anise Masala Chai will be featured in the sofi™ Winner's Showcase. In 2019, their "Traditional Masala Chai" was awarded for the silver within this category, making this their second sofi™ win.

“This is so amazing,” said Blue Lotus Chai Company founder and co-owner Barbara Cameron upon receiving news of the award. “We’re so proud of our Star Anise Masala Chai, and to be honored 2 years in a row leaves us feeling honored and humbled.”

Owned by Barbara and Stephan Cameron, Blue Lotus Chai Company is based in Eugene, Oregon. They first released their Traditional Masala Chai in 2010 and have since expanded the line to six varieties, including Star Anise Masala Chai. All varieties are packaged in three-ounce tins and half-ounce pouches, and can be found in grocery stores, co-ops, natural food chains, online, and in restaurants throughout the United States.

After each of her many trips to India, she would return to Oregon missing her perfect cup of chai, and so would carefully create her own. Eventually, the hour-long ritual of grinding spices and pressing ginger proved too time-consuming and Barbara became determined to create a product that would satisfy the most ardent chai lover. A well-balanced taste, quality, purity, affordability, and meeting all dietary needs, were top priorities. Blue Lotus Chai was born.

All varieties of Blue Lotus Chai feature organic spices, are Non-GMO Project Verified, and are free from sweeteners, milk powders, additives and preservatives. For more information about Blue Lotus Chai Company, or to locate a retailer near you, visit http://www.bluelotuschai.com

EDITOR'S NOTE: For more information about Blue Lotus Chai and to arrange to speak with a company spokesperson, please contact Nancy Trent or Pamela Wadler at 212-966-0024 or pam@trentandcompany.com.